To date, 12 ADCs have been approved by the FDA, namely Adcetris®, Kadcyla®, Besponsa®, Mylotarg®, Lumoxiti®, Polivy®, Padcev®, Enhertu®, Trodelvy®, Blenrep®, Zynlonta™ and Tivdak, for oncology indications only (Table 1, Figure 2a). In addition, more than 80 ADCs are currently in clinical studies as single agents or in combination for various tumor types. 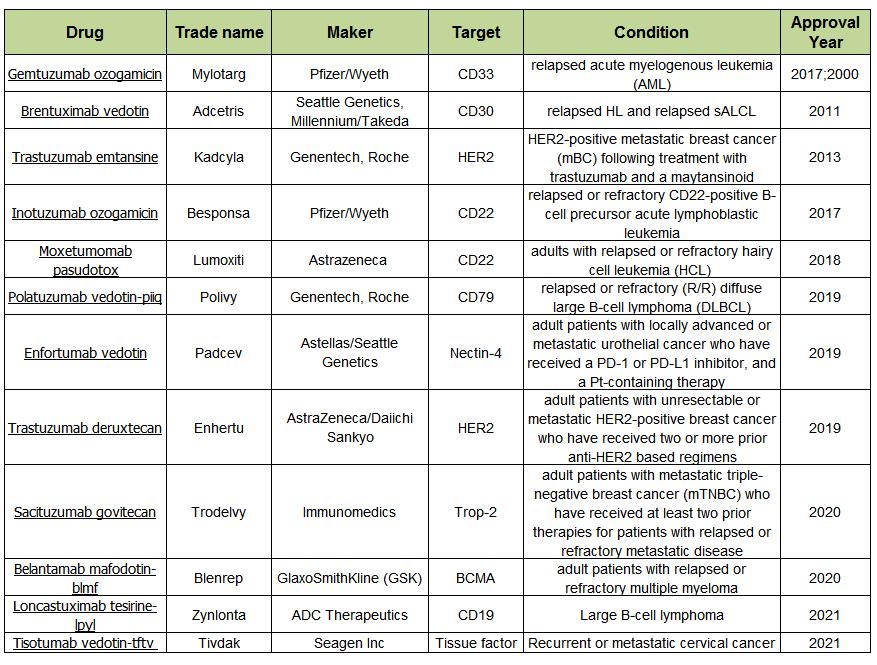 Two of the latest ADCs to be approved, Trodelvy and Zynlonta, were developed with PEG moiety as part of their linker technology to improve solubility and stability in vivo.

On April 23, 2021, the FDA approved Zynlonta, the first CD19-targeted ADC, for the treatment of adults with relapsed or refractory diffuse large B-cell lymphoma (DLBCL), based on the pivotal Phase II clinical trial LOTIS-2. Zynlonta (loncastuximab tesirine) is a humanized CD19 monoclonal antibody conjugated to pyrrolobenzodiazepine (PBD) dimeric cytotoxin via a linker.
PEG linker for Zynlonta

On April 22,2020, the FDA approved sacituzumab govitecan (Trodelvy), a Trop-2-directed antibody conjugated to a topoisomerase I inhibitor (SN-38), for the treatment of some patients with triple-negative breast cancer.
PEG linker for Trodelvy

More than 80 ADCs are currently in active clinical trials, with the majority in Phase I and Phase I/II (Table 2, Figure 3a). More than 80% of clinical trials are investigating the safety and efficacy of ADCs in a variety of solid tumors, while the remaining trials involve hematologic malignancies (Figure 3b). This may indicate a shift in experimental ADCs in solid tumors in recent years with the early success of T-DM1 and the recent approval of T-Dxd, sacituzumab govitecan, and enfortumab vedotin. In this list, there are about 40 different targets with several ADCs against the same target (Table 2, Figure 3c). Challenges in the development of ADCs

Why have more not already been approved? The issue of toxicity has been a challenge, as has the complexity of ADCs and the consequent manufacturing challenges.

Finding the right targets, proteins, linkers and payloads all belong to the discovery phase. This phase is very challenging because properly defining a drug is key to bringing it successfully to the clinic. ADCs represent an equally highly complex and unpredictable product class. Finding the right target and crafting a potent molecule has proven to be much more difficult than many researchers expected at the start of an ADC study. The initial understanding was that finding a good target antigen for an ADC-based compound required a target that could be rapidly internalized once it reached the cell, with the result that in many cases, targets that were ineffective against monoclonal antibody (mAb) therapies due to rapid internalization became the perfect targets for ADC therapies.

Linker chemistry is an important component of ADCs and has a major impact on performance. Linker chemistry plays a key role in in-vivo stability, but was initially assumed to have a passive role with the exception of either being stable or labile in the acidic cytosolic cellular environment.

Over the past 20 years, the technology has evolved and matured to the point where linker technology is stable and molecules in development exhibit low levels of de-conjugation in patients. Both protease-cleavable and non-cleavable linkers are in development and on the market.

Classical conjugation chemistry approaches include maleimide and hydroxysuccinamide-ester moieties (Seattle Genetics, Roche and Pfizer). There are also a variety of newer linker technologies, some in the proof-of-concept stage and some already in preclinical evaluation.

PEG derivatives are one kind of the most widely used linkers in targeted therapy with many features, such as high-usage rate, targeting, regulating PH value, etc. Huateng Pharma offers a variety of PEG linkers to facilitate antibody-drug conjugate (ADC) development projects. All PEG linkers are of >95% purity and they are the basic building blocks for a successful ADC.

Unfortunately, undesired immune responses pose a problem that is difficult to overcome. These responses are largely due to the large number of variables being studied and the relatively small number of clinical trials being conducted.

The main issue affecting ADC approvals today is that the therapeutic window for these therapies is lower than expected. However, this window has proven to be much more complex than originally hoped, and therefore its clinical impact is not as great as originally thought. The complexity of ADCs themselves is also a major issue here.

The ADC supply chain is also very complex. ADCs are unique in that they are manufactured as a amalgamation of classical small molecule manufacturing and traditional mAb manufacturing, with the added complexity of high potency drug manufacturing. All three of these characteristics are complex in themselves, and combining them brings the complexity to an even higher level. Supply chain management of ADCs is one of the most complex processes in the pharmaceutical industry and must be managed by experienced teams with the lowest possible risk.

As more ADCs are approved commercially, it is believed that a roadmap will be established for other companies to follow, leading to more success in the near future.

Related Articles:
What Are PEG Linkers and Their Applications?