According to the ninth edition of the Diabetes Atlas published by the International Diabetes Federation (IDF), the number…

In recent years, the prevalence of diabetes in China continues to increase.  According to the ninth edition of the Diabetes Atlas published by the International Diabetes Federation (IDF), the number of people with diabetes worldwide is estimated to be 463 million in 2019, rising to 578 million in 2030 and 700 million in 2045. Based on this, this article reviewed the research progress & development trend of diabetes drugs and related nano-drug delivery systems, aiming to provide reference for the clinical application of anti-diabetic drugs.

According to the standards of World Health Organization (WHO), diabetes is divided into type 1 diabetes (T1DM) and type 2 diabetes (T2DM), gestational diabetes and special types of diabetes. In China, T2DM patients account for about 90%.

T1DM, also known as autoimmune diabetes, is characterized by an absolute deficiency of insulin due to impaired pancreatic β-cell function. The etiology of T1DM is unknown, and it is generally believed that polygenic and environmental factors work together to cause T1DM. T2DM is non-insulin-dependent diabetes mellitus. Abnormal metabolic processes in vivo lead to decreased glucose uptake and utilization efficiency by skeletal muscle, adipocytes and liver, resulting in pathophysiological changes mainly including insulin resistance and impaired pancreatic β-cell function. The association between β-cell quality and function and disease pathogenesis is shown in Figure 1.

Insulin is a hormone that helps shuttle sugar from your blood into the cells in your body. People with type 1 diabetes or advanced type 2 diabetes need to administer insulin to keep their blood sugar in a healthy range. An insulin analog (also called an insulin analogue) is any of several types of insulin (medication) that are altered forms of the hormone insulin, different from any occurring in nature, but still available to the human body for performing the same action as human insulin in terms of controlling blood glucose levels in diabetes.

According to the mechanism of action of non-insulin drugs, they can be divided into insulin sensitizers, insulin secretagogues and glucose regulators.

2.2.1 Insulin sensitizers. AMP-dependent protein kinase (AMPK) is involved in the regulation of intracellular energy metabolism balance and can improve insulin resistance, which can be a potential therapeutic target for T2DM.

GLP-1 exerts its therapeutic effects on diabetes through multiple mechanisms (Figure 2). At present, most of the GLP-1 receptor agonists used in clinic are injections, mainly including short-acting preparations liraglutide, beinaglutide and long-acting preparations abiglutide, semaglutide, etc.

Dipeptidyl peptidase-4 (DPP-4) can inactivate a variety of peptides containing CD26 target sequences, such as GLP-1. DPP-4 inhibitors mainly include sitagliptin, saxagliptin, etc. It is a new type of hypoglycemic drug, which can significantly reduce the plasma activity of DPP-4 and increase the level of GLP-1, thereby enhancing the hypoglycemic effect of GLP-1. 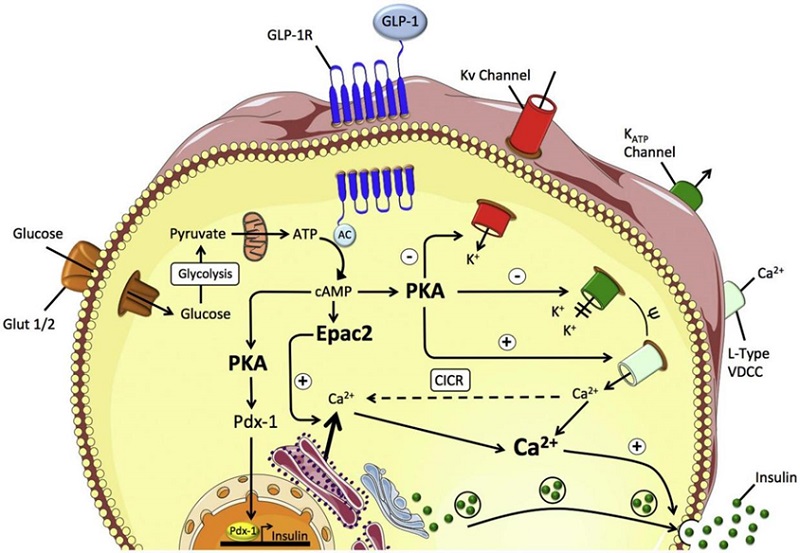 2.2.3 Glucose regulators. Sodium-glucose cotransporter 2 (SGLT2) inhibitors restore normal blood sugar by inhibiting renal tubular reabsorption of glucose and excreting excess glucose in the urine. At the same time, these inhibitors do not act on pancreatic cells or intestinal cells, and can protect the function of pancreatic β cells. At present, the marketed SGLT-2 inhibitors include canagliflozin, dapagliflozin, and empagliflozin, etc. Excessive glucocorticoids can lead to insulin resistance and promote gluconeogenesis by reducing cellular uptake of glucose, ultimately resulting in abnormal blood sugar levels. 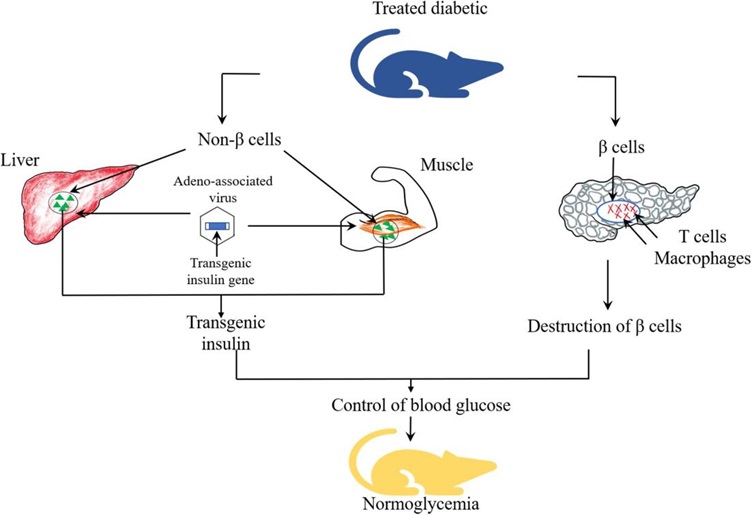 2.3.2 Immunogene therapy. Immunogene therapy is usually used in patients with advanced T1DM. Since the complex autoimmune mechanism of T1DM involves a variety of cells and signaling pathways, current studies attempt to block or reverse the autoimmune response process by transduction of target genes. Immunological intervention protects the function of islet cells and reduces insulin dependence.

2.3.3 Regulatory gene therapy. Studies have shown that dozens of cytokines are involved in the formation and maturation of pancreatic β cells, insulin synthesis and secretion, and the expression of each gene, activation and inactivation of each protein are precisely regulated.  Based on this, researchers are trying to transfer genes that encode relevant cytokines into the organism, thereby promoting normal insulin secretion and maintaining blood glucose homeostasis.

At present, there is still a great space for the research of diabetes drugs and related delivery systems. Firstly, the drug is not stable enough under physiological conditions, resulting in low concentration at target sites. Second, conventional dosage forms are difficult to flexibly adjust drug release according to glucose concentration, resulting in a higher risk of hypoglycemia. In addition, problems such as low target cell uptake efficiency, short plasma half-life, narrow therapeutic window, low bioavailability and poor patient compliance also need to be addressed.

Table 1 lists some nano-drug delivery systems for diabetes treatment and summarizes their in vivo functions.

(2) Nanocarriers can deliver the drug to the target more accurately and carry out continuous controlled drug release at the target, thus producing high-efficiency and low-toxicity therapeutic effects.

(3) Nanoccarriers also have the advantages of protecting drugs from enzyme degradation, overcoming biological barriers in vivo and improving bioavailability.

Liposomes are unilamellar or multilamellar vesicles formed by self-assembly of lipids. Either the hydrophilic inner core or the hydrophobic lipid layer can be used to carry drugs, and the surface of the vesicles can also bind drugs. Liposomes have the advantages of good biocompatibility and biodegradability, low immunogenicity, resistance to enzymatic degradation and strong cell targeting, and have broad application prospects in the field of drug delivery. 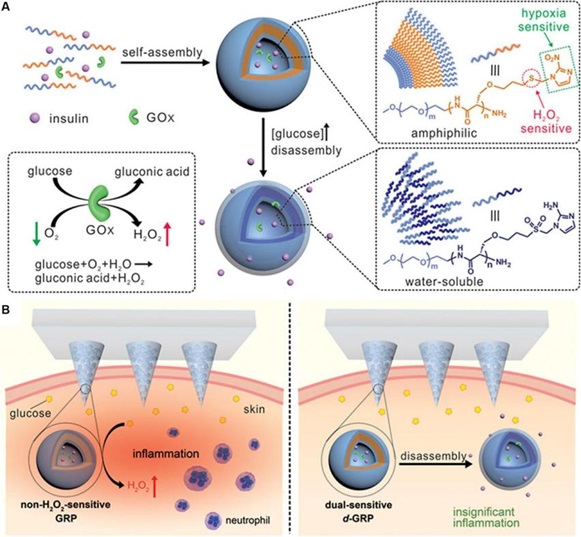 Smart hydrogels loaded with antidiabetic drugs can swell or shrink in response to pH and temperature, transforming from an "off" state to an "on" state. In 2013, Gu et al. from MIT reported an injectable nanogel with proton sponge effect as a closed-loop insulin delivery system that released insulin in a glucose-responsive manner (Figure 5). When the nanogel swells with glucose, the polymer dissociates, triggering insulin release. In addition, an acidic environment can increase insulin solubility, which further increases the rate of insulin release. It is worth mentioning that the drug release behavior of this system is reversible. Under normal blood sugar conditions, the microgels can shrink to stop the release of insulin.

Based on the complexity of the pathogenesis, the understanding of diabetes and the exploration of treatment strategies have gone through a long period. At present, the pathogenesis of diabetes has not been fully studied, and blood sugar regulation is a complex process involving multiple organs, multiple hormones, and multiple signaling pathways. Therefore, in the study of hypoglycemic drugs, the interaction mechanism between targets should be further studied. , It is very necessary to clarify the possible adverse drug reactions.

At the same time, the clinical treatment of diabetes should also fully consider the individual differences in the pathogenesis, constitution and adaptability of patients, and maximize the comprehensive benefits of patients through "personalized diagnosis and treatment". In addition, diabetes education, diet control, exercise therapy, drug therapy, and self-monitoring of blood glucose are currently recognized as effective treatments for diabetes. In conclusion, combining patient self-management with drug therapy is the key to diabetes management