On May 14, Henagliflozin, a SGLT2 inhibitor independently developed by Hengrui Pharma was officially launched. This is th…

SGLT2 inhibitors --- the statins of the 21st century

But it wasn't until 1996 that researchers at Kyoto University and Tanuba Seiygyu developed the first chemically synthesized SGLT2 inhibitor.

In 2012, the European EMA approved the first SGLT2 inhibitor, Dapagliflozin for marketing.

Subsequent studies have proved that SGLT2 inhibitorsare not only a hypoglycemic drug, but also effective in the treatment of type 2 diabetes, heart failure with or without type 2 diabetes and diabetic nephropathy. Eugene Braunwald once called SGLT2 inhibitors "statins of the 21st century" in his review article. 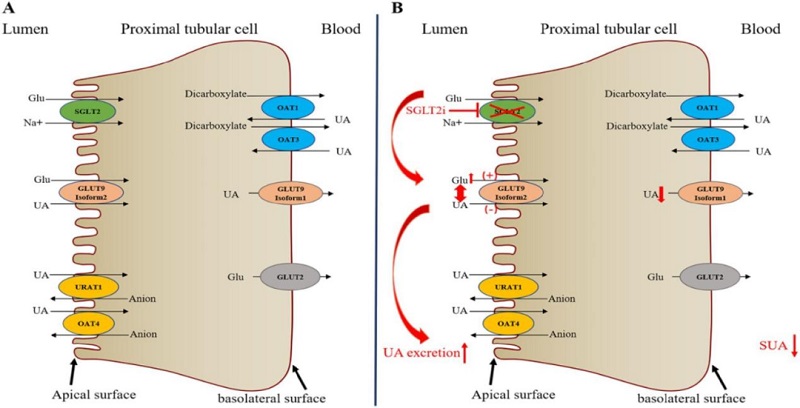 SGLT2, full name is Sodium-glucose Cotransporter-2, which is distributed in the renal tubules and plays the role of reabsorbing the glucose in the original urine back into the blood. When SGLT2 is inhibited, the reabsorption of glucose by the renal tubules will be inhibited, and the urine sugar will increase, thereby reducing blood sugar.

In addition to hypoglycemic effects, SGLT2 inhibitors have these effects:

A number of studies have shown that SGLT2 inhibitors have cardioprotective effects and can be used in the treatment of heart failure. They can not only improve the prognosis of patients, but also reduce the hospitalization rate and mortality rate, and have certain effects on heart failure with or without diabetes.  In addition, it can improve atherosclerosis, myocardial energy metabolism and anti-fibrosis.

The mechanism of action is on the one hand to reduce blood pressure through urinary sodium excretion, and on the other hand to improve vascular cell function and reduce arteriosclerosis by reducing inflammatory response and oxidative stress. Surprisingly, SGLT2 inhibitors can reduce blood pressure without causing hyponatremia.

SGLT2 inhibitors reduce energy through the action of urine sugar, and at the same time induce browning of white adipose tissue. Since there are two main types of fat in humans, namely white fat and brown fat, the former stores energy and the latter produces heat and consumes energy, thus increase the quantity of brown fat, can increase energy consumption, improve metabolism, achieve the effect of weight loss.

SGLT2 inhibitors can lead to increased excretion of uric acid and decrease uric acid in the body. However, compared with classical uric acid lowering drugs, the effect is relatively weak, so it is more promising to be applied to patients with asymptomatic hyperuricemia or diabetes complicated with hyperuricemia. 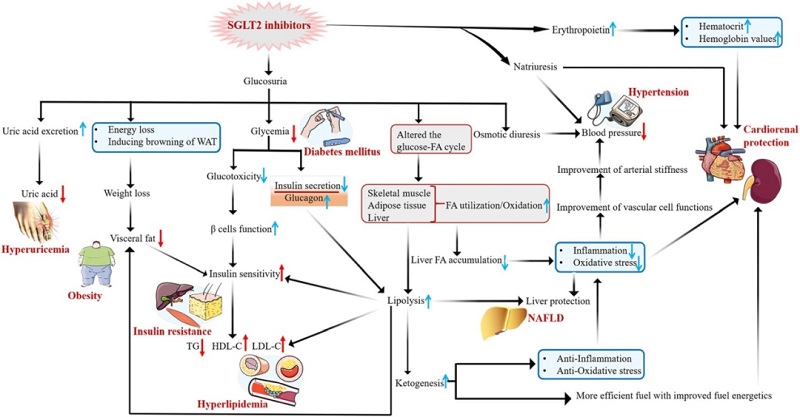 What are the types of SGLT2 inhibitors?

Currently, there are five SGLT2 inhibitors widely used in the treatment of diabetes in the United States and Europe, namely: Empagliflozin, Canagliflozin, Dapagliflozin, Ertugliflozin and Sotagliflozin.

Dapagliflozin is the world's first SGLT2 inhibitor approved for the treatment of type 2 diabetes. It was first approved by the European EMA in 2012. In addition to lowering blood sugar, Dapagliflozin can significantly reduce the incidence of heart failure patients, it has a certain preventive effect on heart failure and proteinuria in diabetic and non-diabetic patients.

Canagliflozin was the first SGLT2 inhibitor approved by the FDA in 2013 to improve glycemic control in adults with type 2 diabetes.

Empagliflozin is currently the best-selling SGLT2 inhibitor, with global sales of $6.14 billion in 2021. Empagliflozin is also the first type 2 diabetes drug to include data on cardiovascular mortality risk reduction in labelling in multiple countries. In China, the indication of Empagliflozin tablets for the treatment of adult patients with heart failure with preserved ejection fraction has been included in the priority review list by CDE, and approval is just around the corner.

The first independently developed SGLT2 inhibitor has been approved in China

The research and development of SGLT2 inhibitors in China is also booming.

Henagliflozin Proline Tablets, a class 1 new drug independently developed by Hengrui Pharma, was approved by the NMPA at the end of last year for improving blood sugar control in adults with type 2 diabetes. On May 14, the drug was officially launched commercially in China.

Since existing SGLT2 inhibitors can not only lower blood sugar, but also have the advantages of reducing heart failure, protecting kidneys, and reducing body weight, making them occupy an increasingly important position and market share in the treatment of diabetes, with promising prospects.

However, it is precisely because of the excellent therapeutic performance of SGLT2 inhibitors that the research enthusiasm remains high, resulting in more and more similar drugs currently on the market, limited development space, and difficulty in breaking through patents. In view of such problems, computer-aided drug design can be fully used to accelerate the design and screening of compounds in the process of preclinical research, and more and better lead compounds can be found by means of molecular docking and virtual screening to facilitate the development of new drugs for SGLT2 inhibitors.