Proteolysis targeting chimera, or PROTACs, are heterobifunctional molecules that are rapidly revolutionizing the market l…

Proteolysis targeting chimera, or PROTACs, are heterobifunctional molecules that rapidly revolutionizing the market landscape in the biomedical field. These heterobifunctional molecules are capable of uniquely degrading target proteins in cells and offer the possibility of improving and prolonging biological activity relative to small molecule inhibitors targeting the same target. Structurally, PROTAC consists of three parts: an E3 ubiquitin ligand and a target protein ligand, as well as a "Linker" specially designed to link the two together, resulting in the triad of the active form of "PROTAC" (Figure 1). However, these heterobifunctional inhibitors are often associated with poor DMPK characteristics, such as low oral bioavailability and challenges of rapid in vivo clearance. 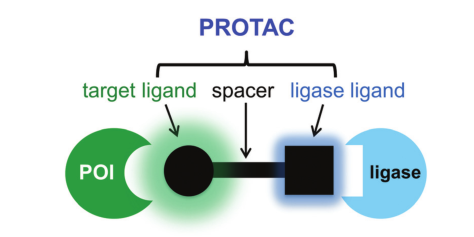 Based on the continuous clinical and commercial success of ADC with cytotoxic payloads, in order to improve its DMPK characteristics and enable more efficient delivery of PROTAC in vivo, several studies have explored coupling PROTAC with monoclonal antibodies. The new molecule produced by the antibody and PROTAC is called the "Degrader-Antibody Conjugates" (DAC), which has several potential advantages over PROTAC molecules :(1) it can deliver the degraders with poor physicochemical or DMPK properties in vivo; (2) avoid complex formulations that are often necessary for PROTACs to gain activity upon in vivo exposure; and (3) target PROTAC molecules of interest to specific tumors or tissues.

While some of the strategies employed by ADCs can be used to prepare biologically active DACs, the construction of DACs sometimes has to overcome several other challenges. In contrast to the broad cytotoxicity of ADC payloads, degrader payloads of DAC often exhibit more cancer-specific biological activities. Therefore, the antigen selected for DAC must not only meet ADC internalization and trafficking criteria, but it should also be highly expressed on tumors, tissues, or other cells sensitive to the biological pathway targeted by the degrader. Additionally, since degrader payloads are typically relatively less toxic than ADC payloads, higher payloads may be required to generate functional antibody conjugates, often with DAR values greater than 4. And DAC PROTACs are typically larger or more lipophilic than ADC payloads.

These differences can amplify aggregation and pharmacokinetic issues when PROTACs are attached to antibodies, so DACs may require the design of new linkers and methods of linking. Numerous studies have reported that PROTACs do not contain chemical groups available for covalent attachment of cleavable linkers, such as primary amines, secondary amines. In this case, careful consideration must be given to purposefully combining the necessary chemical groups into the degrader structure or to using new bonding methods to link the degrader groups, such as hydroxyl/phenol groups, etc. Similar considerations are required for the use of non-cleavable linkers, in which case the linker fragment attached to the degrader structure after antibody catabolism in the lysosome should not interfere with its biological performance, and DAC payload in lysosome environment should has a good stability as well as the ability to escape the lysosome compartment effectively.

One of the earliest examples of DACs published in the peer-reviewed literature appeared in the early 2020s, which described highly potent, VHL-linked degrader (GNE-987) targeting Bromodomain-containing protein 4 (BRD4) attached to targeting CLL1 antibodies via new disulfide-containing cleavable linkers (Figure 2). Note that the carbonate portion with uncertain biostability (yellow ellipse in Figure 2) was used to attach the linker to the degrader via a hydroxyproline fragment present in the VHL binding region with a DAR value of 6.

This DAC demonstrated robust, dose-dependent in vivo antitumor effects in a single intravenous dose of HL-60 and EOL-1 acute myeloid leukemia (AML) xenograft models. And control experiments showed that: (1) the CLL1 antibody without the conjugated degrader had no in vivo activity; (2) the DAC carrying the GNE-987 hydroxyproline isomer payload was also ineffective; (3) the activity of DAC, which recognizes HER2 antigen and is not highly expressed in AML cells, is weak in vivo at the same dose; (4) uncoupled GNE-987 was inactive , and its poorer PK properties may be responsible for this result. In conclusion, these results provide a proof of concept that DAC can exert antitumor effects in vivo through a ligase-dependent degradation mechanism and in an antigen-dependent manner, and that DAC can overcome the undesirable PK properties of PROTAC and achieve acceptable PROTAC lysosomal stability.

There are many other reports using novel linkers as well as ligation methods and mAbs against other targets for the construction of the DAC (Figure 3), which will not be detailed here. These DACs mostly used higher payloads (DAR=6) than most known cytotoxic ADCs (DAR=2 to 4).

Figure 3 DAC molecules have been reported

Although the field of DAC is still in its infancy, many DAC molecular entities have been successfully prepared using various PROTAC payloads, and subsequent experiments have shown good in vitro and in vivo biological activities, proving that DAC can deliver PROTAC payloads potential to a specific tumor or cell of interest. There is no doubt that these promising preliminary results will lay a good foundation for the development and application of future DACs.

PROTAC technology is currently undergoing rapid development, and it can solve the problem of the non-druggability of many target proteins. As a reliable PEG supplier, Huateng Pharma provides multi-functionalized PEG derivatives as PROTAC linkers to empower customers’ PROTAC research.

[3]. PROTAC targeted protein degraders: the past is prologue.