Application of PROTAC In The New Field of Attenuated Vaccines

Influenza is an acute respiratory infection caused by the influenza virus that spreads worldwide. Influenza viruses are divided into four types: A, B, C, and D. Influenza A and B viruses can spread and cause seasonal epidemics. Although influenza has been overshadowed by the COVID-19 pandemic, it remains a major threat to global health, causing severe illness and death in high-risk populations [1].

PROTAC is a bifunctional molecule that induces degradation of target proteins by targeting them to the ubiquitin-proteasome system. They typically contain two covalently linked moieties, one specific for the protein of interest and the other specific for the E3 ligase. Targeted protein degradation technology is mainly studied in the field of anti-tumor. In recent years, it has attracted more and more attention of researchers as an anti-viral method.

Given that viral replication depends on virus-encoded proteins, Longlong Si's group believes that manipulating the stability of viral proteins by using the host cell's proteolytic machinery may represent a potential way to turn the viral life cycle on and off for vaccine development. In this study, the researchers designed a conditionally knockdown proteasome-targeting domain (PTD) on the matrix protein gene fragment of influenza A virus. The PTD contains an ALAPYIP peptide that recognizes the von Hippel-Lindau (VHL) tumor suppressor protein, which is the substrate recognition component of CRL2VHL E3 ubiquitin ligase. The universal expression of VHL in most normal tissues and cell types could provide a critical basis for the safety of PROTAC vaccine. 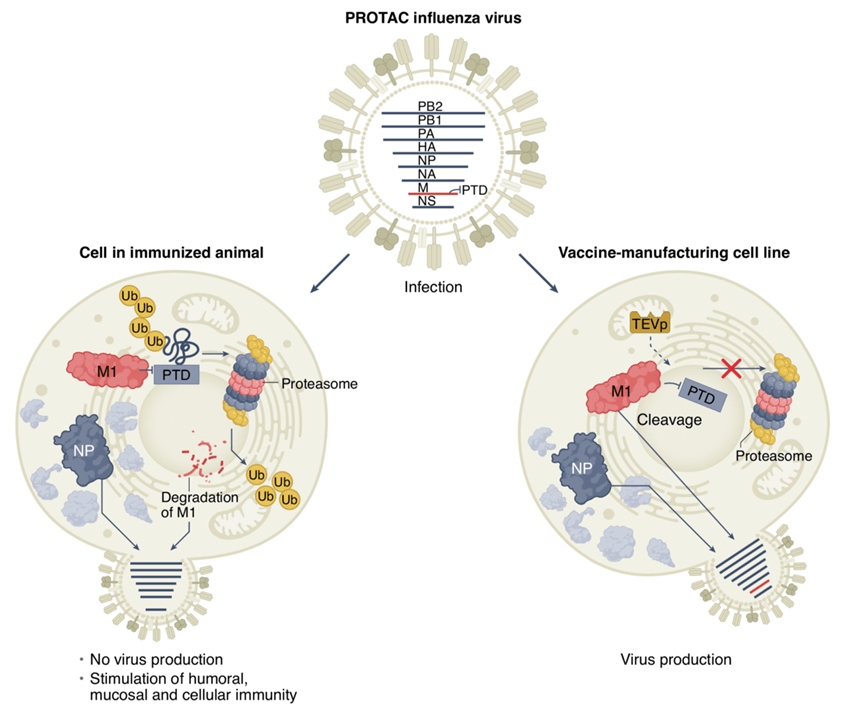 The safety of PROTAC viruses as potential vaccines largely depends on how attenuated they are in conventional cells. To quantify the attenuation of viral protein M1-PTD, the replication kinetics of M1-PTD and WT viruses in MDCK-TEVP and MDCK.2 cells were measured with a complex number of infection (MOI) of 0.01. The results showed that M1-PTD was effectively replicated only in MDCK-TEVP cells but not in MDCK.2 cells (FIG.2).

Next, the researchers demonstrated that PTD-mediated viral protein degradation and PROTAC virus attenuation were proteasome dependent by amplifying M1-PTD virus in conventional MDCK-2 cells in the presence and absence of the proteasome inhibitor MG-132.

In addition, the attenuated effects of PROTAC virus were evaluated in mouse and ferret animal models. The results showed that the median lethal dose (LD50) of WT virus in mice was 104PFU, and 10×LD50 of WT virus caused death in all mice, accompanied by significant weight loss. In contrast, no death, weight loss, or other indicative clinical symptoms were observed in mice infected with the same dose of M1-PTD (FIG. 3A, B). The safety of M1-PTD was further confirmed in a ferret model study. By day 3 after inoculation, M1-PTD titers in the nasal wash, trachea and lung of ferrets showed ~2.0-log, ~2.1-log and ~2.9-log, respectively, compared with WT virus (FIG. 3C, D). All data from animal models indicate that influenza viruses are greatly attenuated in vivo by using host protein degradation mechanisms.

At the same time, there are also data showing that PROTAC vaccine induces a robust and broad immune response in mice and ferrets. M1-PTD (105 PFU) elicited significantly higher (5-50-fold) titers of HI antibodies, NT antibodies, and immunoglobulin G (IgG) against the viral surface HA protein and internal conserved nucleoprotein (NP) than those elicited by the most widely used inactivated influenza vaccine (IIV). 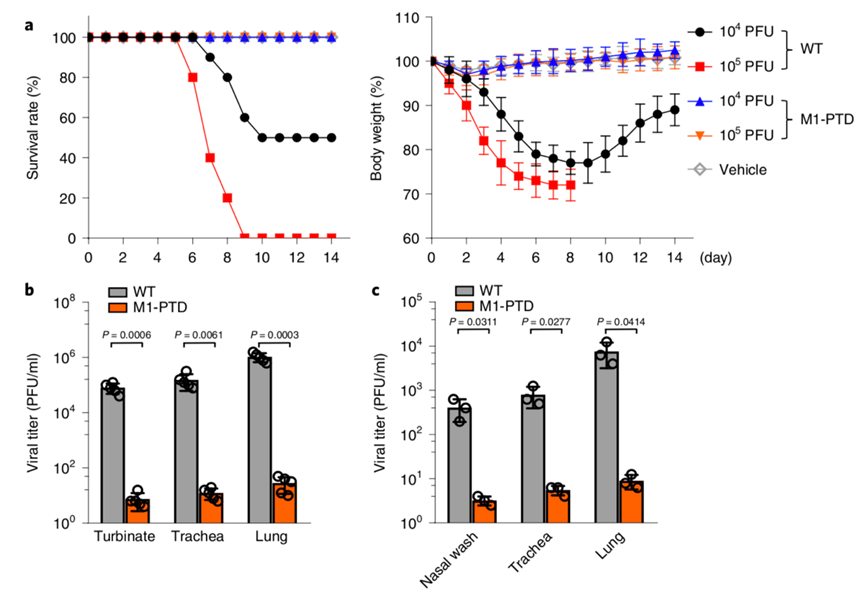 Figure3: Evaluation of the in vivo safety of PROTAC virus M1-PTD in mice and ferrets[2]

The ideal vaccine should be sufficiently attenuated in the host to ensure safety, while maintaining strong immunogenicity to ensure efficacy, and capable of being efficiently produced in a tissue culture platform suitable for manufacturing. The research group of Longlong Si's successfully developed the PROTAC virus vaccine by using the host's protein degradation mechanism to control the stability of viral proteins. PROTAC virus can be highly attenuated in conventional cells but retain high-efficiency replication capacity in an engineered TEVp-MDCK-expressing cell line that has been approved by the U.S. Food and Drug Administration (FDA) for human vaccine production [4]. PROTAC viruses can be sufficiently attenuated in vivo but still elicit robust and diverse humoral, mucosal and cellular immunity, thus providing broad protection against homologous and heterologous viral challenge.

In addition to the methods used clinically to produce inactivated vaccines (IIV) and attenuated vaccines (CAIV), several other strategies have been developed to attenuate viruses in preclinical studies. Compared to these existing methods, the PROTAC virus vaccine technology employs a unique vaccine design principle—that is, the conditional targeting of viral proteins to the host’s protein degradation system to generate proteolytically targeted viruses as vaccines. The method has five key characteristics:

(1) The PROTAC virus vaccine can highly attenuate the virus to a low level of replication capacity, possibly yielding a higher safety profile than existing methods.

(3) Since more than 600 E3 ligases are found in the human ubiquitin-proteasome system, many PTDs can theoretically be used to generate PROTAC viruses.

(4) The PROTAC virus vaccine is a simple and general approach that may be applicable to many other viruses and is available to most laboratories.

Finally, the potential safety issues of PROTAC vaccines require further study. Since VHL is a tumor suppressor protein and loss of VHL was found in clear cell renal carcinoma, this result also raises concerns about the use of VHL as a PROTAC target. As the researchers such as Longlong Si’s group pointed out, the PROTAC approach or specific PROTAC viruses may not be suitable for some people: such as those receiving proteasome inhibitor treatment or those with defective expression of specific E3 ligases. However, many different PTD-E3 ligase pairs and PTD-viral protein linkers can also be investigated. Although personalized selection from a panel of E3 ligases is not feasible for population-based vaccine production, there is room for the development of safe, effective and cost-effective improved PROTAC vaccine candidates. As the method is extended to other viral pathogens, selecting the optimal viral protein to target and ensuring efficient cleavage is one of the details that needs to be investigated.