How to lose weight? Whenever this topic comes up, exercise and dieting are the preferred methods, while drugs always leave the impression of being unsafe and ineffective.

Recently, some weight loss therapies have made quite positive progress. A paper in a Nature sub-publication has identified a key gene mutation that reduces abdominal fat that could eliminate love handles in the future with just one injection a year. In the New England Journal of Medicine, Eli Lilly announced the results of the phase 3 clinical trial of tirzepatide, in which patients lost up to 22.5% of their body weight after 72 weeks of treatment, setting a new benchmark for weight loss with the drug.

On the premise of safety and effectiveness, drug therapy is a shortcut compared to exercise and dieting which require persistent efforts. Based on the huge unfinished needs in the field of weight loss, we have compiled the latest clinical pipeline of drugs under investigation for this indication (as of August 2022) to present the current status and future trends of weight loss drug development.

According to incomplete statistics, a total of 10 weight loss therapies have been marketed, and 21 are in clinical phase 2 (17), phase 3 (2), and pre-registration (2) status. There are three trends of weight loss drug development. 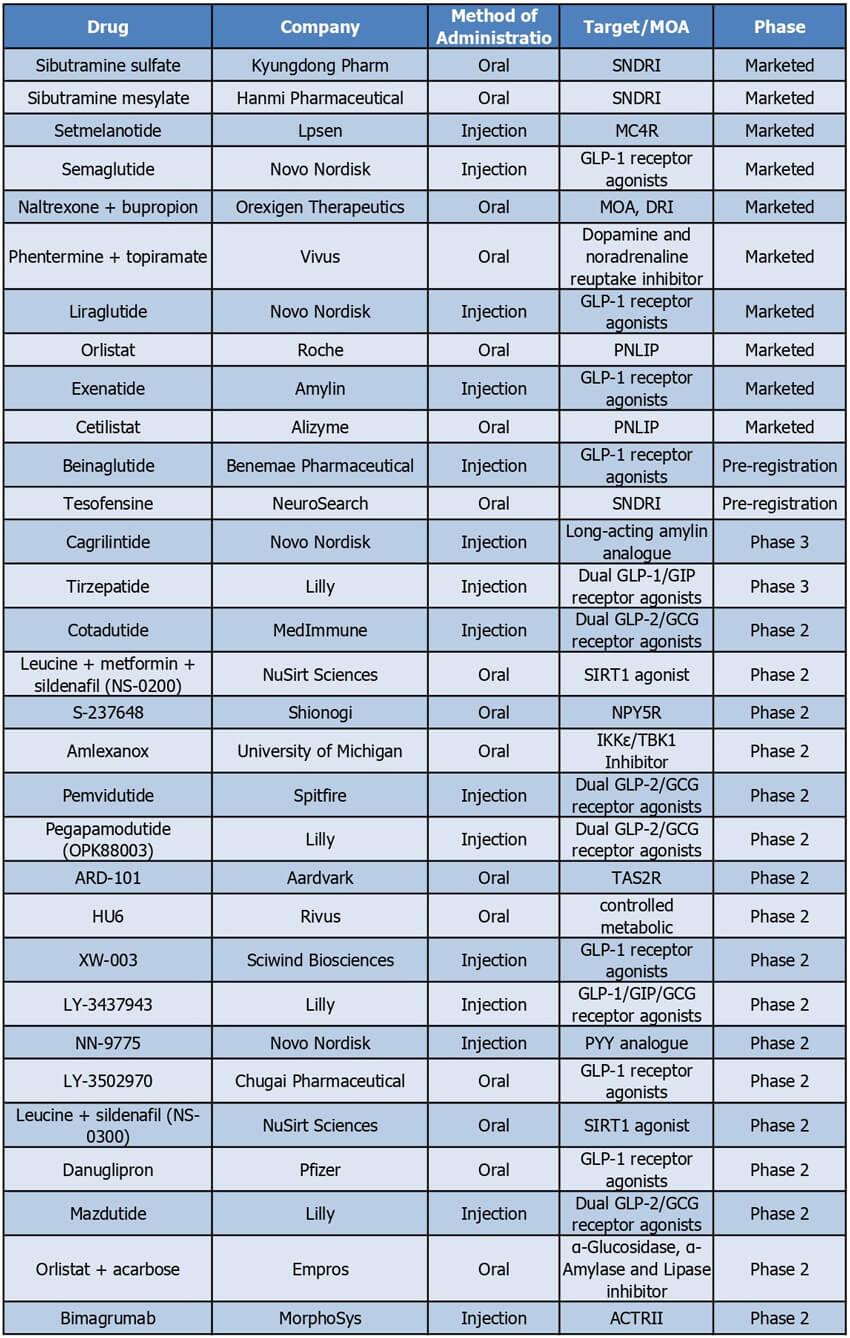 The largest number of therapies targeting the GLP-1 receptor have been used in all phases of development from Phase 2 clinical to market. GLP-1 (glucagon-like peptide 1) belongs to a group of hormones called incretin, which is produced by endocrine cells located in the gut and secreted into the bloodstream within minutes after eating. Its physiological effects include regulating the release of insulin after eating and acting on the body's hypothalamus to regulate appetite. In addition to GLP-1, GIP (glucose-dependent insulinotropic polypeptide) is also a common incretin. Semaglutide and liraglutide, both approved by FDA in recent years, are GLP-1 receptor agonists, and the safety and efficacy of this target has been verified in studies. 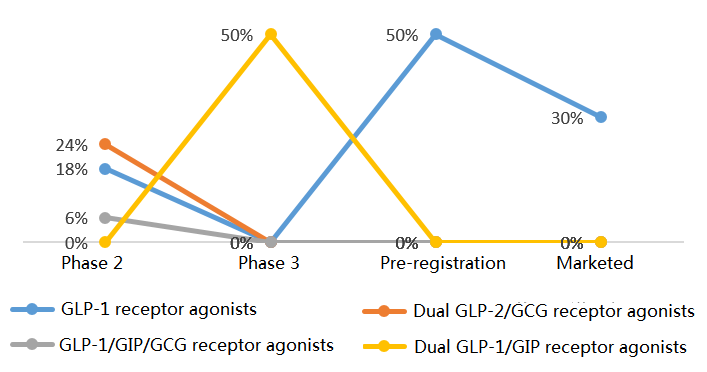 Specifically, GLP-1 receptor agonists account for 30% of marketed drugs, 50% of pre-registered drugs, and 18% of phase 2 drugs. This shows that the proportion of single GLP-1 receptor agonists in early clinical development therapies is gradually decreasing, while dual and triple receptor agonists such as GLP-1/GCG, GLP-1/GIP, and GLP-1/GCG/GIP are more distributed in phase 2 and phase 3 clinical trials. The safety and efficacy of GLP-1 targeted therapies on the market has led to research on incretin therapies targeting multiple mechanisms, as the regulation of energy metabolism itself involves multiple hormones, and drug targeting multiple signaling pathways may produce synergistic effects, thus making the efficacy more significant.

Besides incretin, there is a trend of more diversified and novel targets from marketed to phase 2 therapies. Five of the 10 marketed drugs target non-incretin targets, sibutramine sulfate and sibutramine mesylate are serotonin-norepinephrine-dopamine reuptake inhibitors (SNDRIs), orlistat and cetilistat target gastrointestinal lipase, and naltrexone and bupropion target opiate receptors and adrenergic receptors, respectively.

Of the 2 pre-registered therapies, tesofensine remains an SNDRI, while of the phase 3 therapies, tirzepatide is a dual GLP-1/GIP receptor agonist and cagrilintide is a long-acting amylin analogue. Amylin, a peptide that is co-secreted with insulin, reduces food intake through a signaling pathway that regulates satiety.

Aardvark's lead product, ARD-101 is a first-in-class oral composition targeting extraoral bitter taste receptors (TAS2R). ARD-101 was largely restricted to the gut while still inducing systemic effects, including increased expression of endogenous gut peptide hormones. HU6 is a controlled metabolic accelerator (CMA) that can activate proton leak and mitochondrial uncoupling, a natural process in the body that regulates and dissipates energy. By ferrying protons out of the mitochondrial intermembrane space, CMAs cue the increased oxidation of sugars and fats, while maintaining the same baseline production of adenosine triphosphate (ATP). Activating this process results in the reduction of accumulated fat throughout the body. 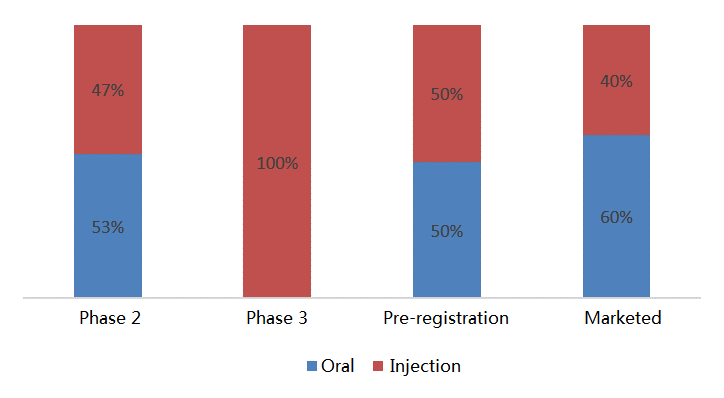 Looking ahead, oral weight loss therapies may be preferred over injections, as compliance with oral dosing is significantly higher than that of injections. It is assumed that the industry will invest more in developing oral formulations of weight-loss drugs, as incretin, a drug that is difficult to make into oral dosage forms, is being explored for oral use.

The effectiveness of weight loss therapies is a topic of great interest, as shown here in a review of weight loss therapies from Nature Reviews Drug Discovery. Of the available weight loss methods, bariatric surgery is the most effective, with an average weight loss of about 30%, but the conditions for performing bariatric surgery are demanding, and the risks of surgery and postoperative recovery are uncertainties that cannot be ignored. In contrast, weight loss drugs greatly surpass surgery in terms of convenience and safety, but are less effective than the former, with most weight loss drugs only reducing weight by 5%-10% and very few by 10%-15%. Historically, the development of weight loss drugs has been fraught with ups and downs. According to the literature, drugs were approved for weight loss as early as the 1930s, yet most were withdrawn from the market because of serious toxic side effects. 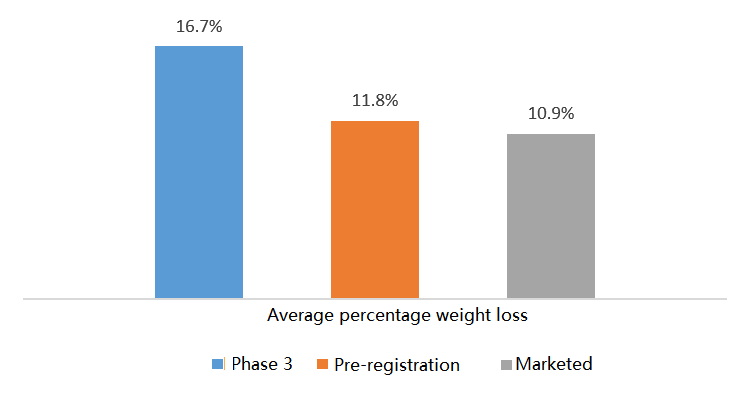 The average percentage of weight loss for marketed, pre-registered, and Phase 3 weight loss drugs is increasing sequentially, and the upper limit of the drug's weight loss efficacy is increasing. For example, results from the STEP Phase 3a clinical trial of semaglutide showed that obese patients treated with the drug lost an average of 17-18% of their body weight and that the effect was maintained for more than 68 weeks. On July 26, Eli Lilly published in the New England Journal of Medicine the results of the clinical Phase 3 trial of tirzepatide, SURMOUNT-1, in which patients lost up to 22.5% of their body weight after 72 weeks of treatment, an effect comparable to bariatric surgery.

Although drugs are not currently the preferred method of weight loss in the public perception, and most weight loss drugs are still in the early to mid-stage of development, the three major trends of target diversification, increased convenience of dosage forms, and improved weight loss effects reflect the industry's concern and commitment to weight loss therapies. We expect more effective, safe and convenient weight loss drugs to emerge as soon as possible to alleviate the public health crisis of the expanding global obesity population.

Huateng Pharma, founded in 2013, is a one-stop contract development and manufacturing organization (CDMO) to supply researchers and companies with PEG derivatives and products used across the pharmaceutical value chain including intermediates, excipients, APIs, and reagents.

2. Lilly's tirzepatide delivered up to 22.5% weight loss in adults with obesity or overweight in SURMOUNT-1. Retrieved August 25, 2022, from https://investor.lilly.com/news-releases/news-release-details/lillys-tirzepatide-delivered-225-weight-loss-adults-obesity-or