Using a proteolysis targeting chimera (PROTAC) approach, researchers have developed a series of LCK degraders for the fig…

T-cell acute lymphoblastic leukemia (T-ALL) is an aggressive hematological malignancy with an unmet need for targeted therapies, especially for patients with recurrent disease. A team led by Yang recently discovered that pre-T cell receptor and lymphocyte-specific protein tyrosine kinase (LCK) signaling are common treatment susceptibility in T-ALL. The LCK inhibitor dasatinib has shown efficacy against T-ALL in preclinical studies and in T-ALL patients. However, in most cases, the effects are temporary.

Using a proteolysis targeting chimera (PROTAC) approach, Yang's team developed a series of LCK degraders, using dasatinib as the LCK ligand and phenyl-glutarimide as the brain-directed moiety. The lead compound SJ11646 from Yang's group showed a significant advantage in brain hormone-mediated degradation of LCK in T-ALL cells. Compared with dasatinib, SJ11646 showed up to three orders of magnitude cytotoxicity in LCK-activated T-ALL cell lines and primary leukemia samples in vitro, and prolonged inhibition of LCK signaling significantly. In vivo pharmacokinetic and pharmacodynamic analyses showed that SJ11646 increased the duration of LCK inhibition by 630% over dasatinib in a patient-derived T-ALL xenograft model.

Finally, SJ11646 retained high binding affinity for 51 human kinases, notably ABL1, KIT and DDR1, all of which are known drug targets in other cancers. In conclusion, the Yang-led team's dasatinib-based phenylglutarimide PROTACs are promising therapeutic agents in T-ALL and a valuable tool for development of degradation-based therapeutics for other cancers.

T-cell acute lymphoblastic leukemia (T-ALL) is one of the most aggressive types of blood cancer. A new study found that proteolysis targeting chimeras (PROTACs) degrade lymphocyte-specific protein tyrosine kinases (LCK), which are active in 40% of T-ALL, prolonging leukemia-free survival in a mouse T-ALL model.

T-ALL arises from the accumulation of genetic lesions during T cell development in the thymus, leading to differentiation arrest and abnormal proliferation of immature progenitor cells. Studying the molecular pathways that drive T-ALL can reveal potential targets.

Dasatinib is a tyrosine kinase inhibitor with potent cytotoxicity in T-ALL cells. Until last year, a team led by Yang identified LCK (a member of the pre-T cell receptor pathway) as the main target of dasatinib, but the target and mechanism of dasatinib sensitivity in this subset of patients remained unclear. Constitutively active LCK signaling in pre-T cells promotes expansion of oncogenic T cells. However, the efficacy of dasatinib may be transient, and sustained efficacy requires prolonged drug maintenance, which may be challenging to achieve pharmacokinetics. In this new project, a team led by Yang and Zoran Rankovic collaborated to develop PROTACs that reduce LCK and irreversibly inhibit LCK signaling.

PROTACs are bifunctional molecules that typically consist of ligands of target proteins connected via linkers to E3 ubiquitin ligase binding components, such as the brain. Thus, PROTACs bring target proteins close to E3, leading to their ubiquitination and subsequent proteasomal degradation.

The immunomodulatory imines lenalidomide and thalidomide bind to the cerebellum and are commonly used in the design of PROTACs, but the efficacy of such PROTACs is affected by rapid hydrolysis. To overcome this hurdle, Rankovic and his team have previously identified phenglutarimide as an alternative cerebellum adhesive with a smaller size and improved chemical stability, binding efficiency, and synthetic feasibility.

SJ11646 Can Effectively Induce The Degradation of LCK In Vitro

Yang's team evaluated the efficacy of a series of PROTAC molecules with dasatinib as the LCK ligand and phenglutarimide as the brain-directed moiety, and selected the most cytotoxic compound SJ11646 for further evaluation. "We did a series of in vivo and in vitro experiments to compare PROTAC with dasatinib and were pleasantly surprised to find how well it worked." Yang said. 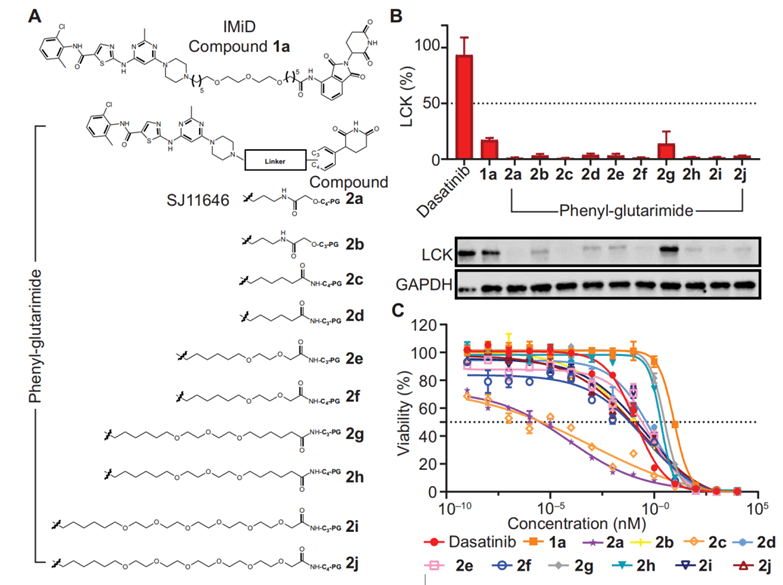 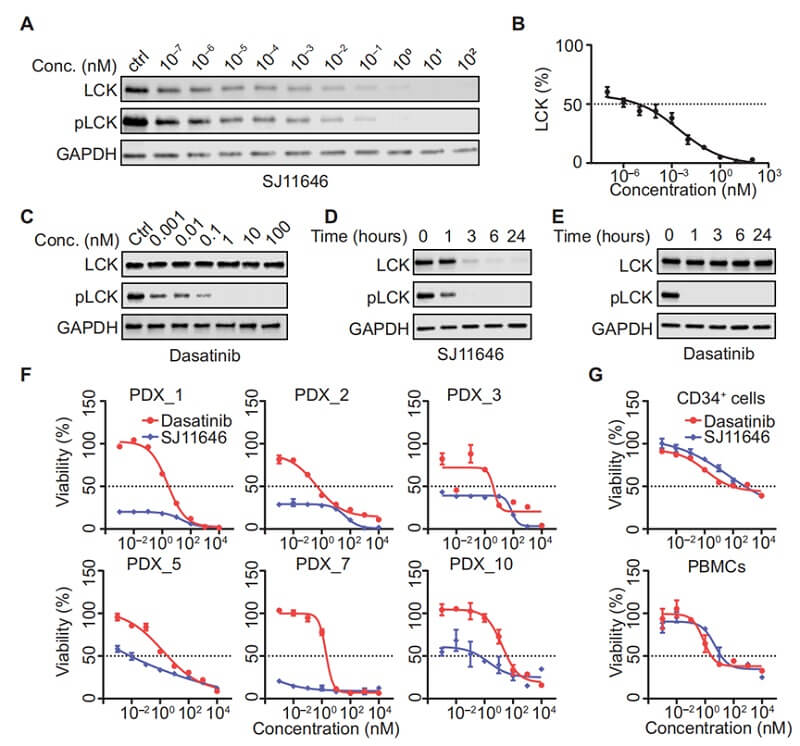 Figure 5: Comparison of kinase selectivity of SJ11646 with dasatinib 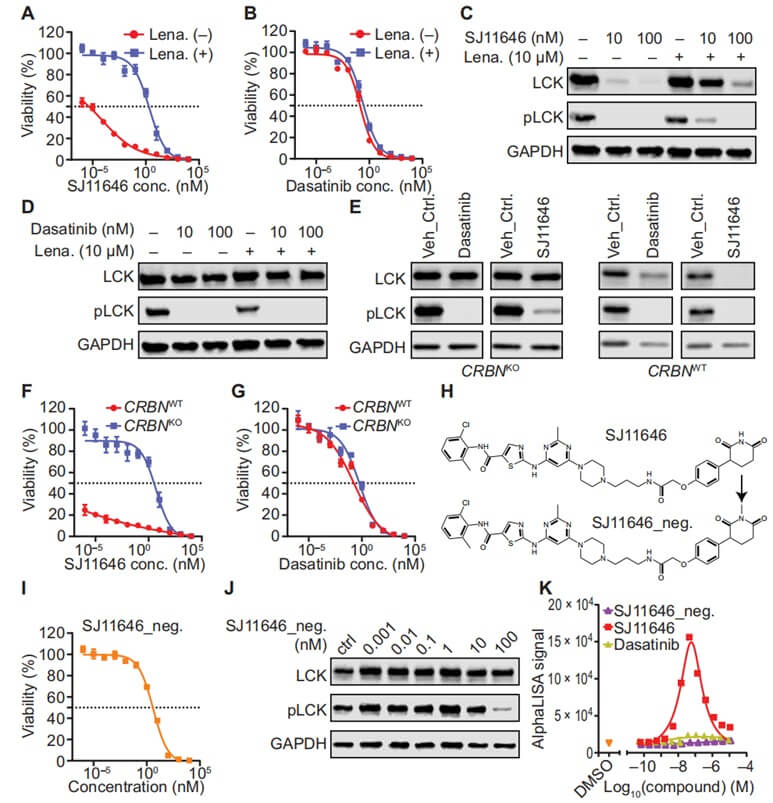 5.SJ11646 Induces Prolongation of LCK Signaling Pathway In Vitro And In Vivo 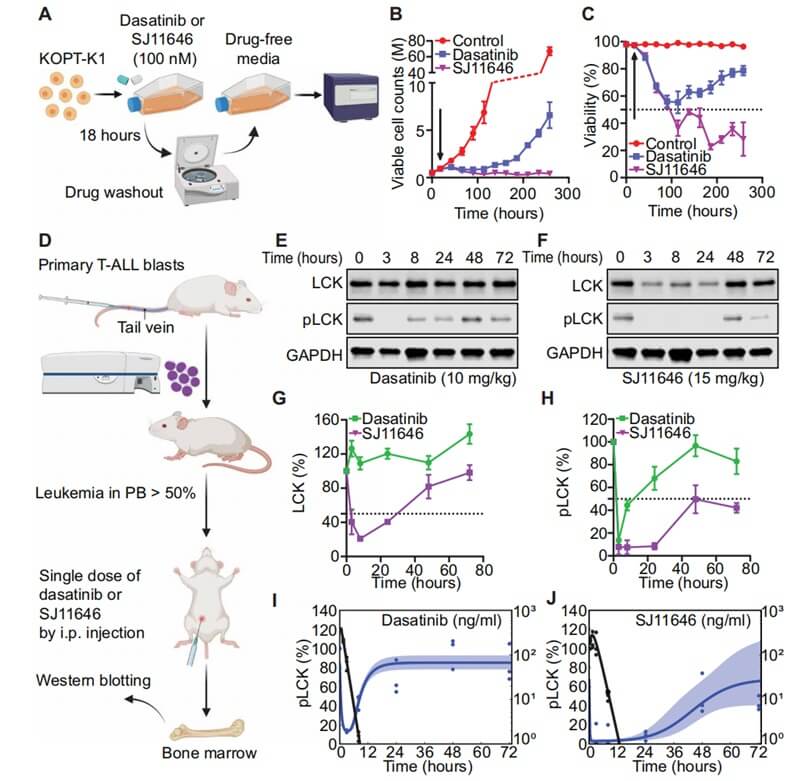 Figure 7: SJ11646 induces prolongation of LCK signaling pathway in vitro and in vivo

6.SJ11646 Has Better In Vivo Efficacy Against Leukemia

This more durable inhibition translates into better anti-leukemia efficacy in vivo. After 7 weeks of daily treatment with SJ11646, pdx-bearing mice had less tumor burden (0.9%-12% cells) compared to dasatinib-treated mice (75%). "While PROTAC showed a stronger efficacy in T-ALL, it showed an effect similar to dasatinib on normal hematopoietic cells, suggesting that SJ11646 has a better therapeutic index," Rankovic noted. 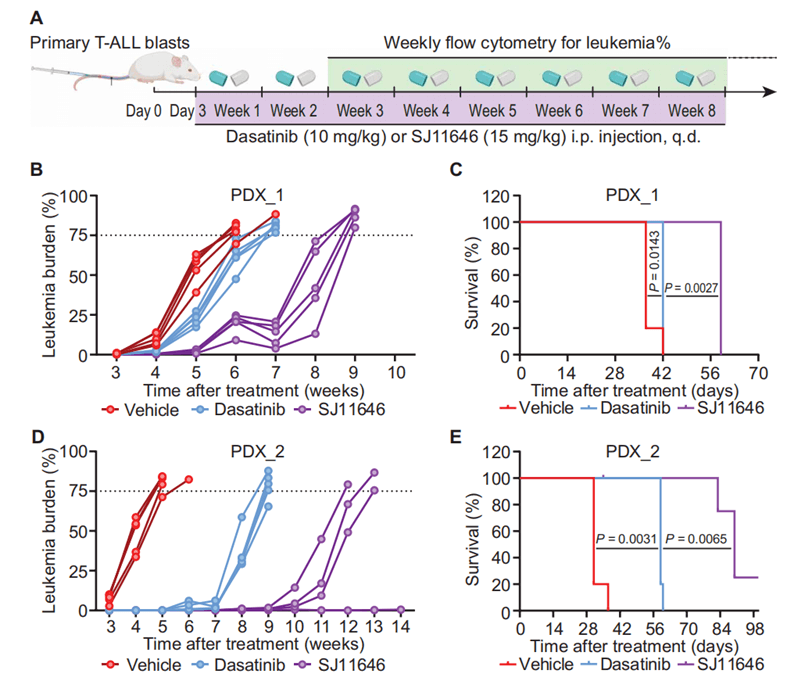 7.SJ11646 may efficiently target a large number of kinases beyond LCK

Finally, SJ11646 retained broader kinase selectivity than dasatinib despite the addition of a linker and phenylglutarimide moiety. Therefore, this PROTAC may effectively target a large number of kinases other than LCK, such as ABL (an important therapeutic target for BCR–ABL-positive cancers), including chronic myeloid leukemia and other subsets of ALL or KIT, which are overexpressed in gastrointestinal stromal tumors.

"While we still have a lot of work to do to optimize the pharmacokinetics of SJ11646, what makes us more excited is exploring its potential in cancers beyond T-ALL. Our lab is systematically testing SJ11646 in up to 1,000 cancer cell lines." Yang said.

Further optimization of this lead compound may improve its pharmacological properties for clinical development and allow for more careful evaluation of strategies to rationally combine LCK-targeted agents with other chemotherapeutic agents.

In the past 20 years, PROTAC has been developing rapidly as a cutting-edge technology in drug research and development, especially in the past few years, PROTAC has become a key therapeutic modality. It is believed that with the continuous advancement and improvement of this technology, PROTAC can become as successful as small molecule inhibitors, monoclonal antibodies and immunotherapy, which can benefit more patients with diseases. Huateng Pharma is a reliable PEG supplier that provides multi-functionalized PEG derivatives as PROTAC linkers to empower customers’ PROTAC research.

[1].Application of PROTAC In The New Field of Attenuated Vaccines