From 1960, when the concept of bispecific antibodies was first introduced, to the end of 2021, only four bispecific antibodies, catumaxomab, blinatumomab, emicizumab and amivantamab-vmjw, have been marketed in nearly six decades, with cataosumab being withdrawn from the market due to poor performance.

What Are Bispecific Antibodies?

Because BsAbs have two binding sites directed at different antigens or recognize two different epitopes of one antigen simultaneously, the functioning pathways are quite flexible.

Bispecific antibodies have a long history, starting in the 1960s when antigen-binding fragments (Fabs) from two different polyclonal sera were re-associated into bispecific F(ab')2 molecules. Boosted by the hybridoma technology established in 1975, it became possible to generate bispecific antibodies of defined specificities by chemical conjugation of two monoclonal antibodies or by fusion of two antibody-producing hybridomas, generating hybrid hybridomas. 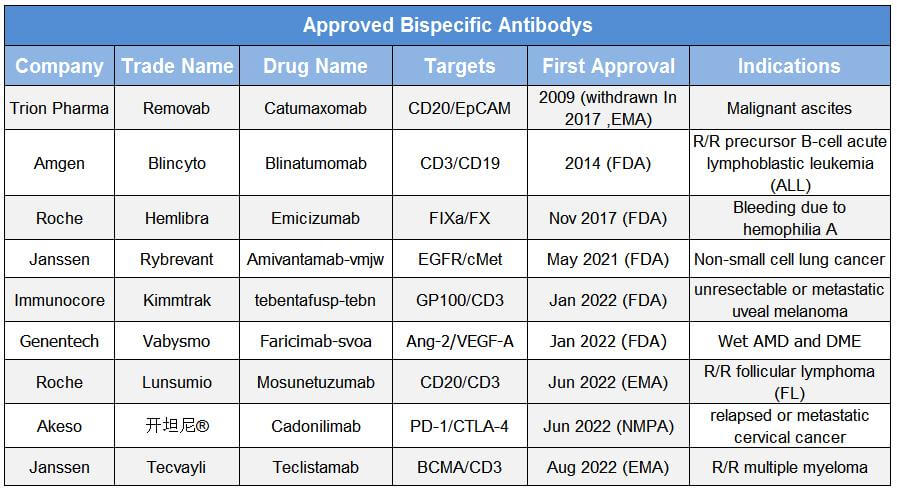 In 2009, the world's first bispecific antibody drug, Removab (target: CD3, Epcam), developed by Trion for the treatment of malignant ascites, was approved for marketing by the European Medicines Agency (EMA). However, due to depressed sales, Removab was temporarily withdrawn from the market in 2017.

Since then bispecific antibody research has stalled. It was not until 2014 that Blincyto (Blinatumomab), a bispecific antibody developed by Amgen, was approved for marketing by the FDA for the treatment of adult patients with Philadelphia chromosome-negative precursor B-cell acute lymphoblastic leukemia (B-cell ALL). In late 2015, Blincyto received accelerated approval from the European Commission for the aforementioned indication. The launch of Blincyto has given hope for the development of a bispecific antibody.

In November 2017, Hemlibra (emicizumab), the third bispecific antibody, was approved by the FDA for the routine prophylactic treatment of adult and pediatric patients with hemophilia A who have developed antibodies called Factor VIII (FVIII) inhibitors. to prevent or reduce bleeding episodes.

Bispecific antibody drugs enter the explosion in 2022. In January, the FDA approved the marketing of Kimmtrak (Tebentafusp), a bispecific antibody targeting gp100/CD3 developed by Immunocore, for the treatment of unresectable or metastatic uveal melanoma.

In June, Lunsumio (Mosunetuzumab), Roche's CD20xCD3 bispecific antibody, was granted conditional marketing authorization by the European Commission for the treatment of adult patients with relapsed or refractory (R/R) follicular lymphoma (FL) who have received at least two prior systemic treatments. Lunsumio has been designed to attach to CD20, a protein found on B lymphocytes, and to CD3, a protein on T cells. By binding to the CD20 and CD3 proteins, the medicine acts like a bridge to bring together the cancer cells and T cells. This encourages the T cells to destroy the cancer cells and helps control the disease.

On August 24, the European Commission (EC) has granted conditional marketing authorisation (CMA) of TECVAYLI® (teclistamab) as monotherapy for the treatment of adult patients with relapsed and refractory multiple myeloma (RRMM).

Do you also have this question? Why did the development of bispecific antibody suddenly explode in 2022 after being slow for the past decade or so?

The concept of bispecific antibodies may seem simple, just put two antibodies together to get a more powerful innovative drug. However, there are many constraints in the actual development process, and every step forward in the technology is incredibly difficult. Specifically, previous constraints in the field of bispecific antibodies were mainly in two areas: low efficiency in drug formation and industrialization, and short drug half-life.

Bispecific antibodies are divided into two major classes: IgG like bispecific antibodies which carry an Fc region and therefore retain Fc-mediated effector functions and the non-IgG like formats which rely entirely on their antigen binding capacity to exert therapeutic effects.

The major challenge in the generation of bispecific IgG antibodies is enforcement of the correct heavy and light chain association. This also leads to a high level of impurity proteins and low industrialization efficiency of bispecific antibodies. The development of KiH, Crossmab and DuoBody technologies help solve this problem.

For Fc-less non-IgG like bispecific antibody, the major problem is rapid clearance from the circulation.

These bispecific antibodies have a small molecular weight and are susceptible to degradation by target cell lysosomes, resulting in a half-life of typically only two hours. Blincyto has a half-life of only two hours and patients need to take the drug frequently. This has been one of the factors limiting the sales of Blincyto. Various technologies have emerged to extend the half-life.

In conclusion, it is thanks to the continuous efforts of scientists over the past decades that bispecific antibodies are as successful as they are today.

Huateng Pharma, as a leading PEG supplier, offers high-quality PEG derivatives and raw materials for your drug research and development. These compounds feature great aqueous solubility, a wide range of polymer length/weight, and a broad selection of all the popular functional groups. Please visit our product page for all our in-stock PEG reagents.