Development And Application of "Click Chemistry" In ADC And PROTAC

On Oct 5th, the 2022 Nobel Prize in Chemistry was awarded to Carolyn R. Bertozzi of Stanford University, Morten Meldal of the University of Copenhagen, Denmark, and K. Barry Sharpless of the Scripps Research Institute. For their contributions to "the development of click chemistry and bioorthogonal chemistry". 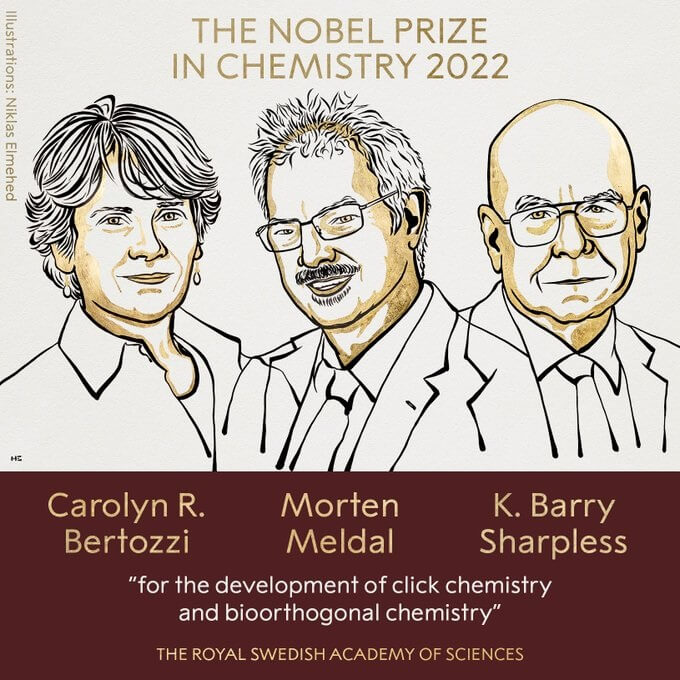 Winner of the 2022 Nobel Prize in Chemistry

Click Chemistry, also known as link chemistry, is an idea of synthesis first proposed by Professor K. B. Sharpless in 2001. Taking inspiration from Nature's methods, K. B. Sharpless has proposed a set of powerful, highly reliable, and selective reactions for the rapid synthesis of high-value libraries of novel and combinatorial compounds by heteroatom links (C-X-C). 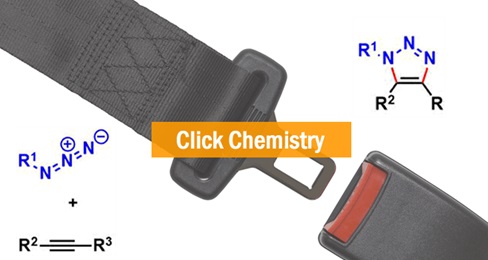 After the concept of click chemistry was introduced, the first click chemistry reaction was reported by K. B. Sharpless in 2002: the monovalent copper-catalyzed azide-alkyne cycloaddition reaction, referred to as the CuAAC reaction.

In 2019, K. B. Sharpless and Jiajia Dong discovered a method for the synthesis of fluoro-sulfonyl azides: FSO2N3 reagent can be used to efficiently convert primary amine compounds into corresponding azides. This reaction can be combined with CuAAC reaction to construct a modular library of click compounds and directly screen for biological activity. 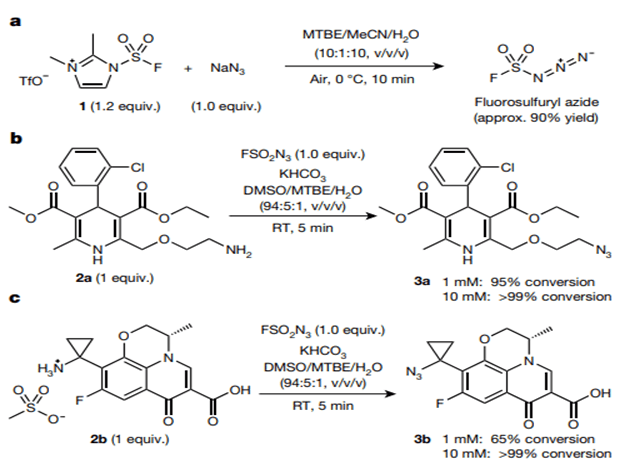 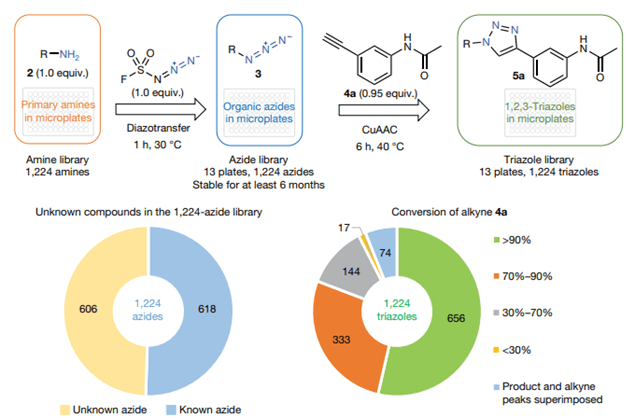 Due to mild reaction conditions, high reaction efficiency and modular synthesis, click chemistry is often used in the development of ADCs and PROTAC drugs, especially in the linker for PROTAC molecules.

Click chemistry was proposed by K.Barry Sharpless, who won the Nobel Prize in Chemistry in the United States in 2001. Its core is to develop a whole set of new combinatorial chemistry methods based on C-X-C containing heteroatom links, which can obtain a wider molecular diversity with a small number of simple, reliable and highly selective chemical transformations. Bioorthogonal click chemistry can be performed in living systems without interfering with normal life activities. 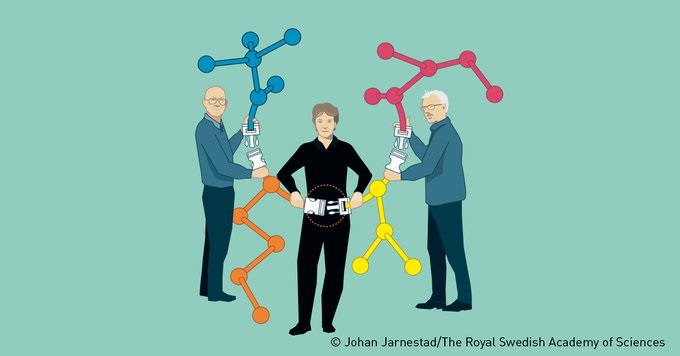 Briefly, the principle of click chemistry is that a pair of functional groups react with each other rapidly and selectively under certain environmental conditions. That is, two compatible click functional groups A and B are activated, and the activated two molecules form a stable couple. 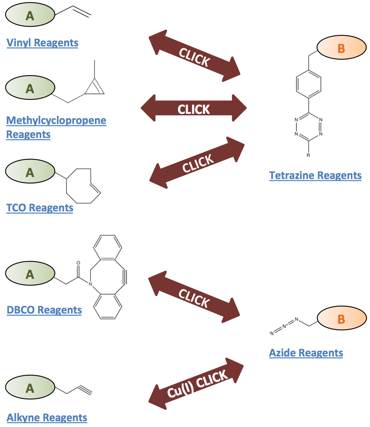 Based on its ability to effectively link two functional groups together, click chemistry has also begun to make breakthroughs in the field of drug research and development. Click chemistry is also present in the hot field of antibody-drug couples (ADCs) in recent years. There is also room for click chemistry in the equally hot field of PROTAC, which is still in concept and has not yet come to fruition.

Over the past two decades, bioinorganic and medicinal chemists have increasingly used click chemistry for the development of targeted drugs, such as ADCs.

The click chemical reaction developed by Carolyn Bertozzi occurs between azide and alkyne (a cyclooctylene shown above) components, and since these groups are absent in biomolecules, it enables other chemical groups to remain in the same state and can be used in living cells.

ADCs cleaved by click chemistry have expanded their use, enabling pervasive and direct temporal control of drug release in the tumor microenvironment. This would allow for more uniform drug delivery, potentially improving the therapeutic effect of heterogeneous or poorly penetrating tumors. At present, they are all in the relatively early stage of clinical trials, and there is still a long way to go before they can be truly applied in clinical practice.

The human ubiquitin-proteasomesystem (UPS) is the main pathway of intracellular protein degradation, which is involved in more than 80% of intracellular protein degradation. In simple terms, the process is like a cell taking unused documents (aberrant proteins) to its secretary (E3 enzyme), stamping them with an obsolete stamp (ubiquitination), and throwing them into a shredder (proteasome). UPS is an important way of regulating a series of life processes in cells, which is closely related to the occurrence and development of diseases. Three distinguished scientists also won the 2004 Nobel Prize in Chemistry for their work on ubiquitin. 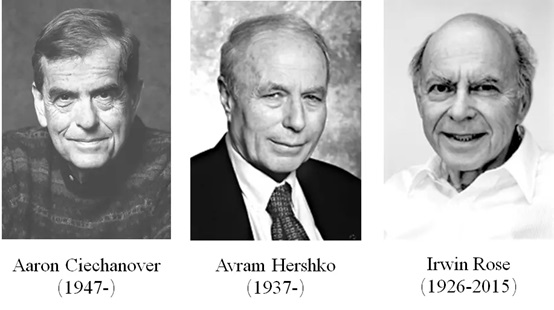 Winner of the 2004 Nobel Prize in Chemistry

PROTAC, the full name is Proteolysis Targeting Chimeras. As shown in the figure below, PROTAC can bind to the target protein of interest (POI) and E3 ligase to form a ternary complex. In vivo, the target protein and the E3 enzyme can be brought closer, so that the target protein is labeled with ubiquitin, and then degraded through the ubiquitin-proteasome pathway. 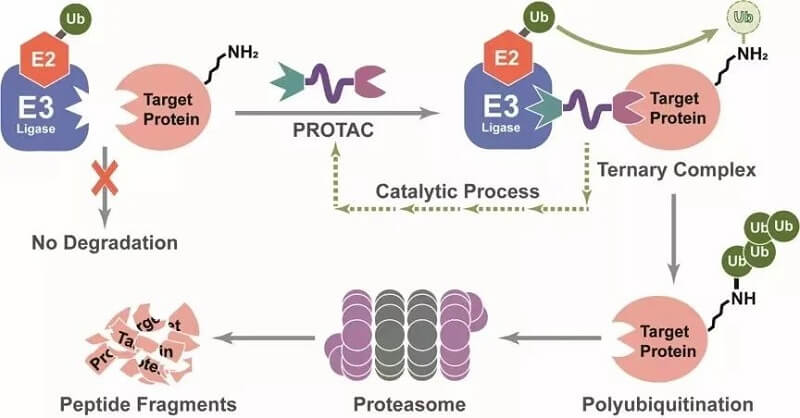 In theory, more than 80% of intracellular proteins can be degraded using catalytic amounts of drugs, thus changing the target from "non-druggable" to "druggable" properties. Thus, PROTAC technology has great potential to overcome drug resistance and target non-druggable targets.

However, the difficulty of PROTAC development is the same as that of ADC. Linker also determines the success or failure of PROTAC. The length of linker will also affect the degradation activity of PROTAC, and the commonly used linker length is generally 4~15 carbon atoms (or heteroatoms). According to the different target, the length of linker has different influence on the degradation activity.

Due to the milder and more efficient reaction conditions, the click chemistry is often used in the linker of PROTAC molecules, which is used to connect the molecules at both ends. Through literature search, there have been research teams trying to integrate click chemistry and PROTAC, hoping to accelerate the breakthrough of PROTAC from concept to application.

[2]. Application of PROTAC In The New Field of Attenuated Vaccines