Directions for Next Generation Antibody-Drug Conjugates

Three generations of ADCs overview and next generation ADC forecast.

Since the FDA approved the first ADC product, Mylotarg® (gemtuzumab ozogamicin), in 2000, a total of 15 ADCs have been approved for hematologic malignancies and solid tumors as of November 2022. In addition, more than 100 ADC product candidates are currently in various stages of clinical trials. 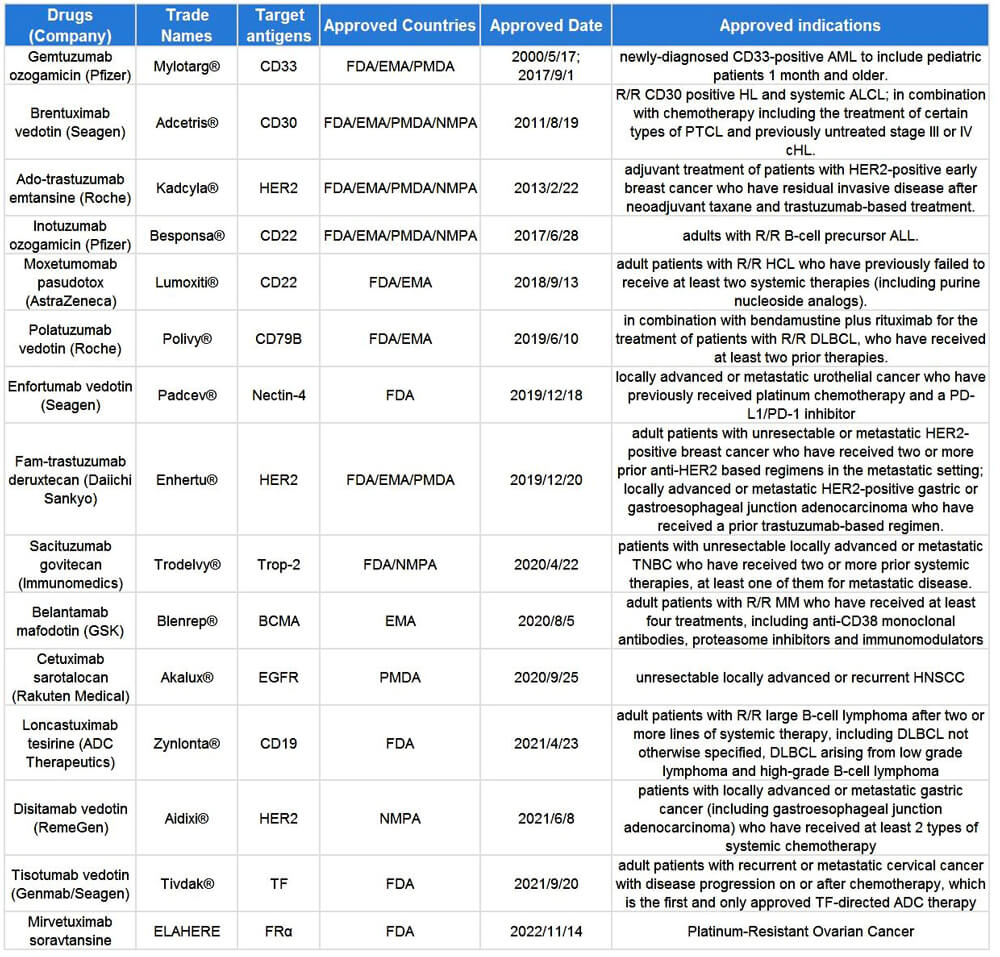 In terms of drug composition and technical characteristics, ADC drugs can be subdivided into three generations.

Early ADCs consisted mainly of conventional chemotherapeutic drugs coupled to mouse-derived antibodies via non-cleavable linkers. These ADCs were not superior in efficacy to free cytotoxic drugs and were highly immunogenic. Later, the use of more potent cytotoxic agents in combination with humanized mAb greatly improved efficacy and safety, resulting in market approval of the first generation of ADCs (including gemtuzumab ozogamicin (Mylotarg) and inotuzumab ozogamicin (Besponsa)). In both products, humanized mAbs of the IgG4 isotype were used and conjugated to the potent cytotoxic calicheamicin via acid-unstable linkers. However, the system also suffers from substantial drawbacks. 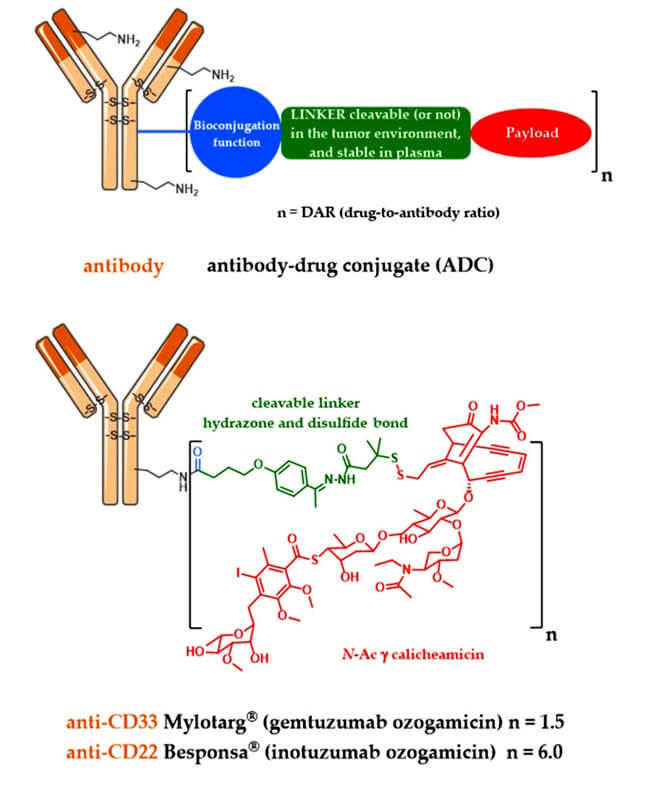 Figure 3. The structure of the first-generation ADCs, source: reference [3]

1) Linker instability: For example, acidic conditions may occur in other parts of the body, and the linker in first-generation ADCs can also be found to hydrolyze slowly in the body circulation (pH 7.4, 37°C), leading to uncontrolled release of toxic payload and unexpected off-target toxicity.

2) Easy aggregation: The payloads used in the first generation are hydrophobic and tend to cause antibody aggregation, leading to several defects such as short half-life, rapid clearance and immunogenicity. 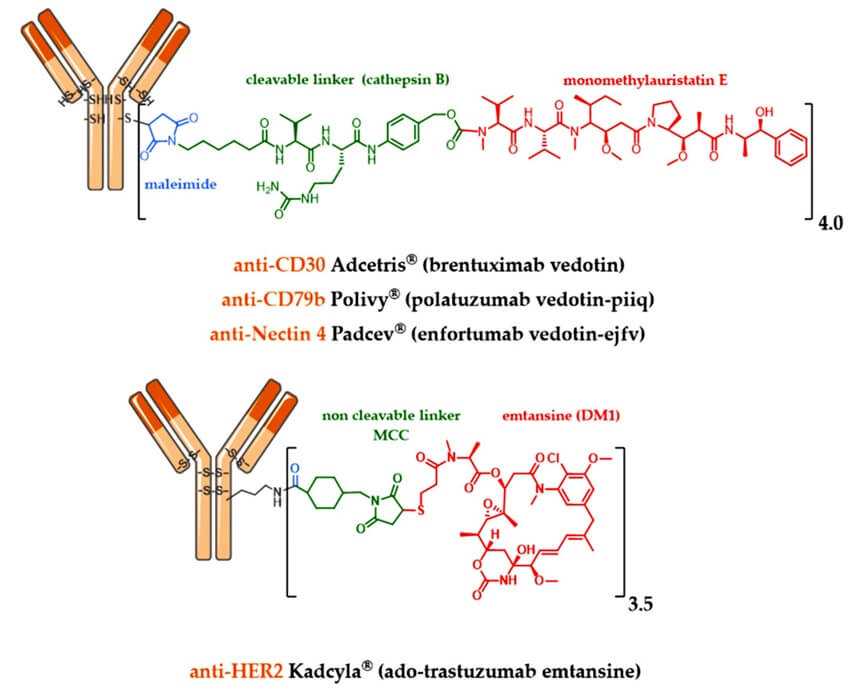 1) Use of IgG1 isotype mAb, which is more suitable for bioconjugation with small molecule payload and high cancer cell targeting ability.

2) Use of more potent cytotoxic payloads with improved water solubility and coupling efficiency. More payload molecules can be loaded onto each mAb without inducing antibody aggregation.

Overall, improvements in all three elements enhance the clinical efficacy and safety of second-generation ADCs. However, many unmet needs remain, such as inadequate therapeutic windows due to off-target toxicity, and aggregation or rapid clearance in those ADCs with high DARs. When the DAR exceeds 6, ADCs exhibit high hydrophobicity and tend to reduce ADC efficacy due to faster clearance in vivo. Optimization of DAR by site-specific conjugation, as well as continuous optimization of mAb, linker and payload, is also required in such cases. 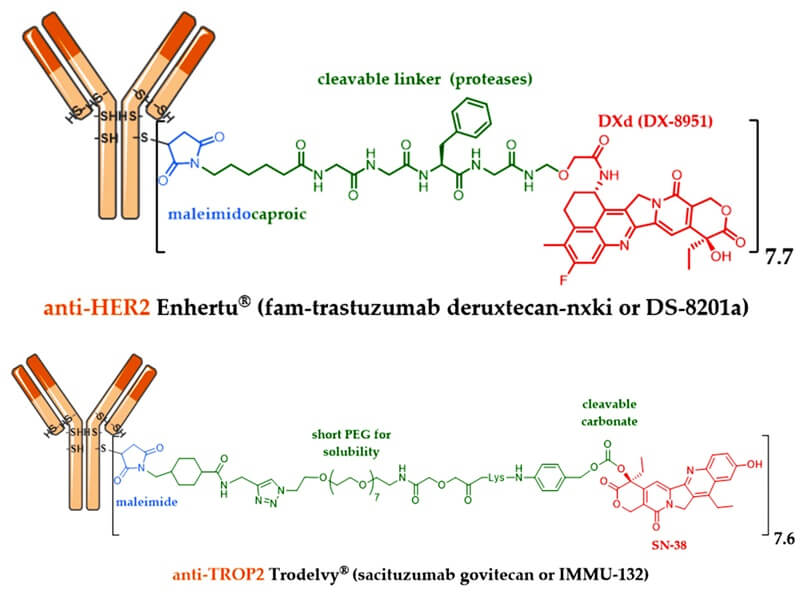 Figure 5. The structure of third-generation of ADCs, source: reference [3]

2) Fully humanized antibodies rather than chimeric antibodies to reduce immunogenicity.

In addition, antigen-binding fragments (Fab) are being developed to replace the intact mAb in many ADC candidates, as Fab is more stable in the body circulation and may be more readily internalized by cancer cells. In addition, more potent payloads have been developed: e.g., PBD, microtubulin, and immunomodulators with novel mechanisms. Although there are no updates to the type of linker in the third generation, several new entities have been developed for binding various payloads. To avoid interference with the immune system and to improve retention time in the circulation, more combinations of hydrophilic Linkers, such as PEGylation, have been used in the third-generation ADCs. Hydrophilic linkers can also be used to balance the high hydrophobicity of certain cytotoxic payloads (e.g., PBD), and ADCs with hydrophobic payloads are usually easy to aggregate. Overall, third-generation ADCs have lower toxicity and higher anticancer activity as well as greater stability, allowing patients to receive better anticancer therapy.
Huateng Pharma is dedicated to being your most reliable partner to provide high-quality PEG linkers to promote the progress of your ADC R&D. PEG Linker is one of the most widely used linkers  in ADCs, which can increase the water solubility, improve the DAR value and increase the cycle half-life of ADCs.

However, it is not always easy to develop innovative oncology products, and this is also true for the ADC pipelines, such as Mylotarg®, the first ADC product to be launched worldwide, and Blenrep®, which was recently withdrawn from the US market.

On November 22, 2022, GSK announced that it has initiated the process towithdraw the U.S. marketing authorization for Blenrep (belentanumab-bafodotin-blmf). This request was based on the results of the previously announced Phase III confirmatory trial of DREAMM-3, which did not meet the requirements of the FDA's accelerated approval regulations. Blenrep is a monotherapy for adult patients with relapsed or refractory multiple myeloma (RRMM) who have received at least four previous treatments, including anti-CD38 monoclonal antibodies, proteasome inhibitors and immunomodulatory agents.

In 2000, the FDA granted accelerated approval to Pfizer's ADC, Mylotarg®, as a monotherapy (high dose) for adult patients with CD33-positive acute myeloid leukemia (AML) who have experienced the first relapse ang were  60 years or older and who were not candidates for other cytotoxic chemotherapy. This was the first launch of Mylotarg®, which made it the first commercially available ADC product in the world. However , Pfizer voluntarily withdrew Mylotarg in the U.S. due to safety concerns in 2010.

Subsequently, Pfizer supplemented the clinical evidence with an update, adjusted the specification from the original 5 mg/vial to 4.5 mg/vial, and adjusted the dosing regimen accordingly, and resubmitted the application to the FDA. In 2017, Mylotarg® was approved and re-marketed for the treatment of adults with newly diagnosed CD33-positive AML. The FDA also approved Mylotarg for the treatment of patients aged 2 years and older with CD33-positive AML who have experienced a relapse or who have not responded to initial treatment (refractory).

There are many challenges in the development of ADCs, including pharmacokinetic complexity, inadequate tumor targeting and payload release, and drug resistance.

After administration of ADC (primarily by intravenous infusion), three major forms may be present in the body circulation, namely intact ADC, naked antibodies, and free cytotoxic payload. In the typical pharmacokinetic profile of ADC, concentrations of both conjugated ADC and naked antibody decrease continuously as internalization of ADC and antibody clearance occur. Factors affecting antibody clearance include the mononuclear phagocyte system and Fc receptor (FcRn)-mediated recycling. By binding with high affinity to endocytosed ADCs, FcRn exports ADCs to the extracellular compartment for recycling. As a result, antibodies including both conjugated ADCs and naked antibodies typically have a longer half-life than conventional small molecule drugs.

The free cytotoxic payload is metabolized primarily in the liver and excreted via the kidneys (urine) or feces, which may lead to hepatic and renal impairment. All these factors, combined with high inter-patient variability, make it difficult to develop PK and PD models to characterize the clinical profile of ADC and to assist in the design of new ADCs.

Of the 15 approved ADCs, the most common serious side effects (grade 3 or higher) were hematologic toxicity, including neutropenia, thrombocytopenia, leukopenia, and anemia. Hematotoxicity, as well as hepatotoxicity and gastrointestinal reactions, may be associated with premature release of cytotoxic payload into the circulation. This is consistent with conventional chemotherapeutic agents that primarily affect those healthy cells that proliferate rapidly. In addition, the immune response induced by the antibody portion of ADC may cause secondary damage leading to nephrotoxicity.

Based on recent clinical observations, potential lung toxic effects (e.g., ILD) during ADC therapy should be noted, particularly in anti-HER2 ADCs. In clinical trials with T-DM1 and DS-8201, several deaths have been reported in association with ILD. However, the detailed mechanism of action of ILD remains unclear. It has been speculated that one of the possible causes may be related to poor uptake of ADCs in healthy lung cells and free payload released by ADCs. Due to the most abundant blood flow and the longest residence time in the lungs, adverse uptake of ADC and free payload in the blood most often occur in the lungs to induce ILD. Here, the next-generation ADCs need to be optimized accordingly to minimize side effects. Adverse reactions should be closely monitored during drug administration and prevented or given supportive treatment.

The molecular weight of ADCs is much larger compared to conventional cytotoxic drugs, and the efficiency of drug penetration into tumors is limited. Current studies have shown that only a small fraction of ADCs input to patients can reach tumor cells, and therefore payload potency needs to be considered when designing ADCs.

Another challenge in ADC development is drug resistance. Resistance to tyrosine kinase inhibitors (TKI) usually involves escape mutations in the drug target. However, the mechanisms of resistance to ADCs have not been fully characterized. ADC resistance is more complex and diverse. Current evidence suggests that tumors can develop ADC resistance in multiple ways, such as reduced levels of antigen expression, altered intracellular transport pathways, and resistance to payloads.

Current studies have shown that ADC internalization and intracellular transport pathways have a critical impact on the cytotoxic activity of ADC. Compared to wild-type proteins, mutant proteins usually have higher levels of ubiquitination and are more susceptible to internalization and degradation. This means that if ADC is used to target mutant proteins, it may result in a significant clinical response. It is conceivable that targeting ADCs carrying oncogenic mutant proteins, such as certain EGFR mutants, could maximize the tumor specificity of treatment to the level of selective TKI.

Advances in bispecific antibody technology have opened up more possibilities for ADC innovation. These ADC designs can improve antibody internalization and enhance tumor specificity. Therapies currently in development have been exploring these possibilities. Bispecific ADCs targeting different sites on the same antigen could improve receptor aggregation and lead to rapid internalization of the target site. In addition, bispecific ADCs dual targeting HER2 and LAMP-3 have shown better lysosomal aggregation and load delivery in preclinical trials.

3) Use of Two Different Payload Combinations

Dual payload ADCs using two different cytotoxic agents as payloads to reduce drug resistance. By accurately controlling the ratio of the two drugs and delivering two synergistic payloads to cancer cells, more effective efficacy can be achieved. And with the application of two payloads with different mechanisms, the incidence of drug resistance will be significantly reduced. For example, a homogeneous anti-HER2 ADC containing both MMAE and MMAF was designed and exerted more significant anti-tumor activity than co-administration of the corresponding single payload ADC in a xenograft mouse model.

Another development strategy is to abandon the traditional structure of mAb and choose to couple the payload to a peptide fragment with a smaller molecular weight - peptide drug conjugates (PDC). The main aim of these strategies is to reduce the molecular weight of ADCs, thus improving penetration efficiency and payload delivery to tumor tissue. For example, PEN-221 is an ADC that consists of DM-1 bound to a peptide chain targeting growth inhibitor receptor 2. Its molecular weight is only 2 kDa, which is much lower than the 150 kDa IgG molecule in conventional ADCs. The current technical challenge for such ADCs is their potential for rapid clearance in plasma. However, if we can overcome this hurdle, it has the potential in treating hard-to-reach tumors, including poorly vascularly innervated tumors and central nervous system tumors.

Traditionally, in order to deliver payload to cancer cells, ADCs require mAb with high internalization capacity; however, due to the antigenic barrier, it is often difficult for mAb to diffuse into solid tumor masses. Therefore, non-internalized antibodies can be developed for ADCs. It is based on the principle that the payload is released directly outside the cell under reducing conditions in the tumor microenvironment and then diffuses into the cancer cell interior leading to cell death.

A variety of ADC therapies have been successfully developed, benefiting tens of thousands of cancer patients. The approval of 15 ADC drugs and the excellent clinical performance of several ADCs have also drawn more attention to this field, which is very important for this relatively young but highly complex field. With the continued efforts of researchers in these fields, it is easy to imagine that the future of ADCs will reveal even more surprises in targeted cancer therapies.

What Are PEG Linkers and Their Applications?