In addition to vaccines, oral antiviral drugs are expected to play an important role in the treatment of COVID-19 caused …

The COVID-19 pandemic has been spreading throughout the world for a long time, and the situation of pandemic is still quite serious in the world. Many countries have invested a lot of energy, manpower and material resources to develop excellent vaccines or drugs as soon as possible to completely conquer the COVID-19 pandemic.

In addition to vaccines, oral antiviral drugs are expected to play an important role in the treatment of COVID-19 caused by severe acute respiratory disease coronavirus-2 (SARS-CoV-2) infection. These oral antiviral drugs must have significant antiviral activity, as well as target specificity, oral bioavailability and metabolic stability. Although several antiviral compounds have been reported to be possible SARS-CoV-2 inhibitors in vitro, only a few of these drugs have been shown to be effective in vivo. 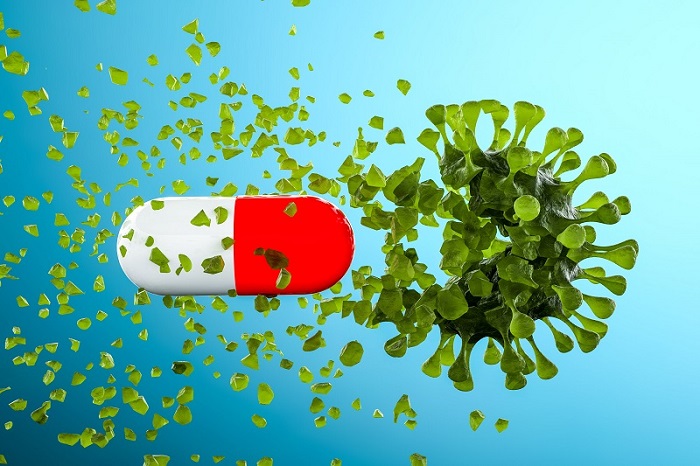 Ensitrelvir (code name S-217622, brand name Xocova) is a novel antiviral drug developed by Shionogi in partnership with Hokkaido University. Shionogi is the fifth-largest pharmaceutical company in Japan which founded in Osaka in 1878. It owns the "super flu drug" Xofluza (Baloxavir marboxil) jointly developed with Roche. Tamiflu (Oseltamivir ), the most commonly used drug for the flu now, is also produced by this company.

Ensitrelvir is a new inhibitor of the SARS-CoV-2 main protease (Mpro), also known as 3C-like protease. It has been shown to reduce the viral load and help alleviate the severity of SARS-CoV-2 in infected hamsters. In cells, low nanomolar to submicromolar doses of Ensitrelvir inhibited viral growth. In hamsters, oral treatment of Ensitrelvir showed excellent pharmacokinetic properties and accelerated recovery from acute SARS-CoV-2 infection.

Ensitrelvir also demonstrated antiviral efficacy against SARS-CoV-2 variants of concern (VOCs), such as the highly pathogenic Delta variant and the newly discovered Omicron variant. Overall, these findings suggest that the antiviral drug Ensitrelvir, currently being tested in Phase II/III clinical trials, has impressive antiviral efficiency and effectiveness against SARS-CoV-2 and could be a viable oral treatment option for COVID-19.

With SARS-CoV-2, the host produces specific antibodies between 10 and 14 days after infection. No seroconversion was observed in hamsters administered with S-217622.

These findings suggest that S-217622 has antiviral activity in vivo and that prophylactic treatment can protect hamsters from SARS-CoV-2 infection. In the lungs of hamsters, prophylactic treatment with S-217622 resulted in a more than 105-fold reduction in viral ribonucleic acid (RNA) load and viral titers below the detection limit at 4 days post-infection (dpi).

Additionally, prophylactic treatment with S-217622 was found to prevent virus transmission among co-housed hamsters, demonstrating that S-217622 has strong antiviral activity in vivo. 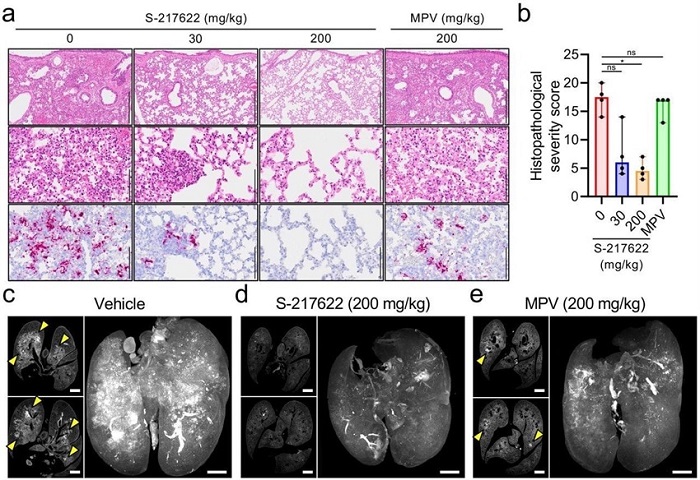 Histopathological findings in the lungs of SARS-CoV-2-infected hamsters that were administered antivirals.

The main protease (Mpro, also known as 3CLpro) in the novel coronavirus is responsible for cleaving the polyprotein into 12 smaller proteins, which participate in viral RNA replication. If the protease function of Mpro is inhibited, the replication of the novel coronavirus will be blocked. Therefore, the Mpro is an important drug target for the treatment of COVID-19, and there are multiple inhibitors against this protein in the clinical development stage.

At present, there are only three oral drugs developed in the world against the COVID-19. The first one is "Molnupiravir" which was developed by Merck. It was approved for medical use in the United Kingdom in November 2021. Later on, the U.S. FDA granted an emergency use authorization (EUA) to molnupiravir for use in certain populations where other treatments are not feasible in December 2021. The second one is "Paxlovid", which was developed by Pfizer in the United States. It is a combination of Pfizer's investigational antiviral nirmatrelvir (PF-07321332) and a low dose of ritonavir. On December 22, 2021, the FDA granted EUA Paxlovid for the treatment of adults and pediatric patients with mild to moderate COVID-19. The third one is "Ensitrelvir" produced by Shionogi in Japan, which is also the only oral drug in Japan. Although the drug is now in the final stages of development, production has already begun. (It is said that if the drug application is recognized by the government, it will be on the market immediately, and it is expected that all patients with mild new crowns who are recuperating at home can buy it.)

The difference between Paxlovid and Ensitrelvir

Both Paxlovid and Ensitrelvir target the 3CL protease (3CLpro). These two oral drugs are designed to block the activity of the SARS-CoV-2-3CL protease, thereby blocking the replication of the novel coronavirus. What are their didfferences?

Paxlovid has been granted EUA by the FDA, and it received emergency approval in mainland China. The Phase III clinical trials of Ensitrelvir is completed. It became the first Japanese domestic pill to treat COVID-19, third to be regulatorally approved in February 2022 in Japan.

Paxlovid is mainly administered to infected persons over 12 years old who have mild symptoms and tend to become severe. For Ensitrelvir, regardless of whether there is a tendency to become severe or not, can be taken by people over 12 years old who are diagnosed as positive, regardless of whether they have symptoms or not. It has a wider range of treatments than Paxlovid.

According to clinical trial results released by Pfizer, Paxlovid reduced hospitalization rates by 30% and mortality rates by 89% among patients with mild and moderate symptoms that tend to become severe. The results of Shionogi's oral drug Ensitrelvir clinical trial conducted on 428 patients over 12 years old with mild and moderate symptoms showed that, on the 4th day of three days of oral administration, 80% of them were unable to detect novel coronavirus. On the 6th day after taking it for 5 days, the new coronavirus in 100% of the people has completely disappeared.

The clinical trial results also showed that after taking Ensitrelvir, symptoms such as runny nose, nasal congestion, sore throat, cough, and difficulty breathing were greatly improved, and the side effects were minimal. Moreover, it has a significant inhibitory effect on the proliferation of the novel coronavirus strain of Omicron. The oral medicine Ensitrelvir developed by Shionogi is a pill. Once approved by the Japanese government, it is expected to become an over-the-counter medicine like cold medicine and a powerful weapon against the new coronavirus epidemic.

[2] Paxlovid and Molnupiravir: What Are The Differences?