This article provides an overview of triple negative breast cancer and a summary of FDA-approved therapies.

Breast cancer is cancer that occurs in breast cells. Breast cancer is one of the most common cancers diagnosed in women in the United States, second only to skin cancer. Both men and women can develop breast cancer, but the incidence is much higher in women than in men. This article provides an overview of triple negative breast cancer and a summary of FDA-approved therapies. Survival rates for breast cancer have now improved, and deaths associated with the disease have steadily declined, largely due to factors such as early detection, new personalized treatments, and a better understanding of the disease.

Triple-negative breast cancer (TNBC) accounts for 10-15% of breast cancers, with 60,000-80,000 new cases of TNBC in 2020. It is a severely invasive and highly proliferative subtype, accounting for a higher proportion in young women. The prognosis is poor, with most patients relapsing after three years and dying five years before diagnosis. Chemotherapy remains the primary treatment for patients with early and advanced TNBC, an area of highly unmet medical need that urgently requires improved treatment regimenand optimized precision medicine. 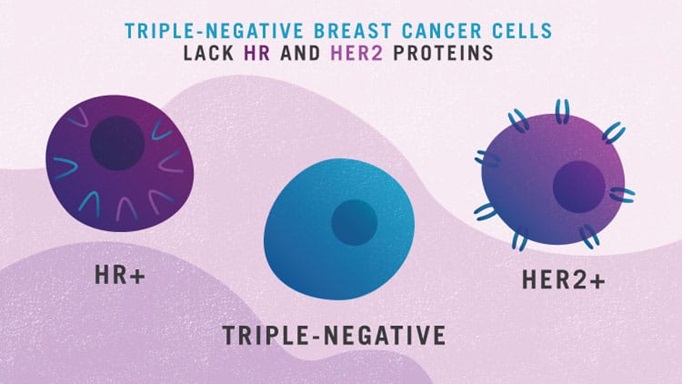 Because TNBC lacks estrogen receptor (ER), progesterone receptor (PR), and human epidermal growth factor-2 (HER-2) receptors, TNBC cannot be treated with conventional HER2-targeted therapies. Breast cancer is also considered a "cold" tumor from an immunological point of view, however, due to the higher number of tumor-infiltrating lymphocytes (higher PD-L1 expression, higher tumor mutational load), TNBC has been shown to be the preferred subtype for immunotherapy strategies.

The approval is based on IMpassion130 (NCT02425891), a multicenter, international, double-blind, placebo-controlled, randomized trial including 902 patients with unresectable locally advanced or metastatic TNBC who had not received chemotherapy. Among patients whose tumors expressed PD-L1, atezolizumab and albumin-bound paclitaxel had a median progression-free survival (PFS) of 7.4 months (95%CI:6.6, 9.2). Median progression-free survival (PFS) was 4.8 months (95%CI:3.8, 5.5) for patients receiving placebo and albumin-bound paclitaxel. But overall survival data are not mature, with 43% of intent-to-treat (ITT) people dying. 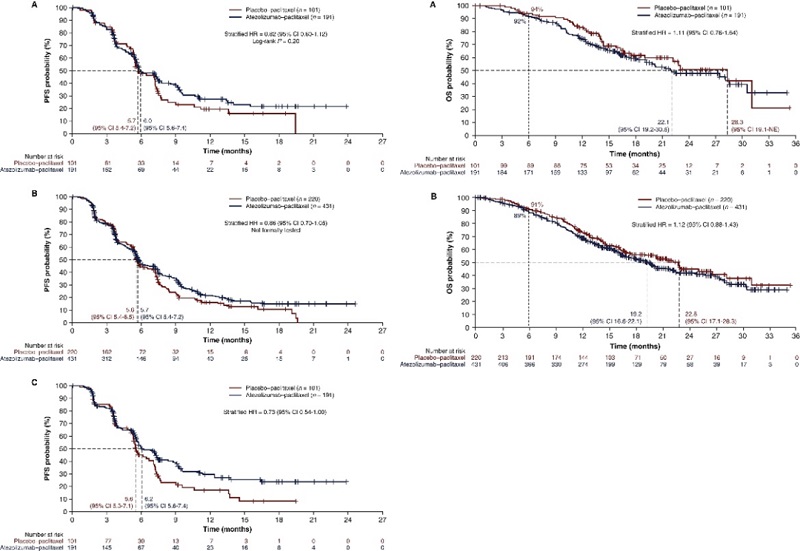 The approval was based on KEYNOTE-355 (NCT02819518), a randomized, double-blind, phase III clinical trial. Among patients with locally recurrent unresectable or metastatic TNBC whose tumors expressed PD-L1 (combined positive score [CPS] ≥10), median PFS was 9.7 months in the pembrolizumab + chemotherapy group and 5.6 months in the control group. This difference was more pronounced with an increase in PD-L1 CPS.

In July 2021, the FDA approved pembrolizumab in combination with chemotherapy as neoadjuvant therapy for high-risk, early-stage, triple-negative breast cancer (TNBC), followed by continuation of monotherapy as adjuvant therapy after surgery. 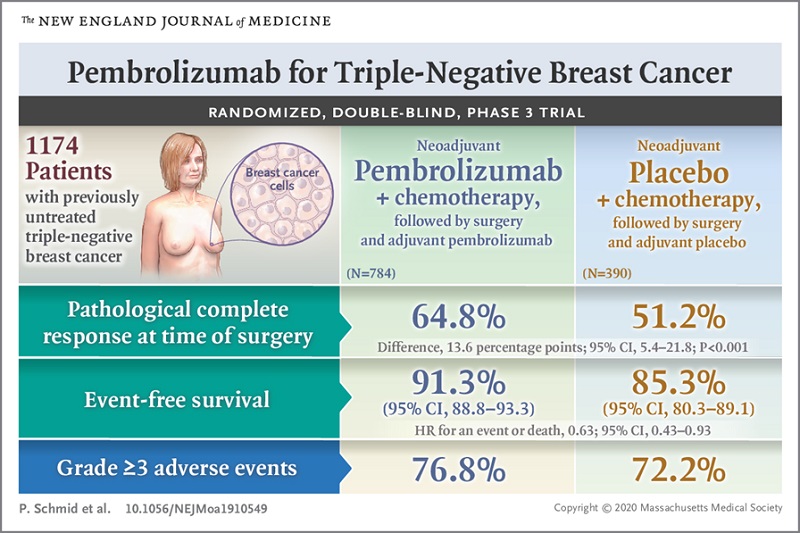 In April 2021, sacituzumab govitecan was approved by the FDA for adult patients with unresectable locally advanced or metastatic TNBC who have received at least 2 prior therapies, at least one of which is for metastatic disease.

Sacituzumab govitecan was originally developed by Immunomedics. On June 7, 2022, Sacituzumab Govitecan was approved for marketing in China for the second-line treatment of metastatic triple-negative breast cancer. This is Everest Medicines's first innovative drug approved for marketing in China, and sales in China are expected to start in the fourth quarter of this year.

Sacituzumab govitecan is formed by coupling a humanized IgG1 antibody targeting TROp-2 (human trophoblastocyte surface antigen 2) with SN-38, a metabolically active product of the chemotherapeutic drug Irinotekan, a topoisomerase I inhibitor. Trop2 is expressed in 85% of TNBC cells.

FDA recommended dosage: The recommended dose of Sacituzumab govitecan is 10 mg/kg once a week or administered on days 1 and 8 of the 21-day treatment cycle until disease progression or unacceptable toxicity. 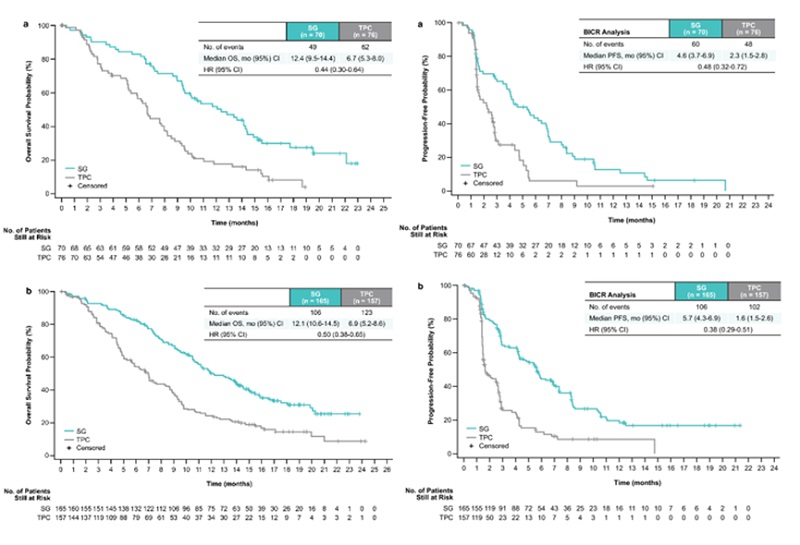 As a professional manufacturer of PEG derivatives, pharmaceutical intermediates and research chemicals, Huateng Pharma provides anti-cancer intermediate products for some drugs, such as Palbociclib and Ribociclib which used for the treatment of certain kinds of breast cancer. Both Palbociclib and Ribociclib are inhibitors of CDK4 and CDK6. Sacituzumab govitecan (IMMU-132) is an ADC drug approved in 2020 which used to treat adults triple-negative breast cancer. Huateng Pharma is dedicated to being your most reliable partner to provide high-quality PEG linkers to promote the progress of your ADC R&D.