Today, Glucagon-like peptide-1 receptor agonists (GLP-1 RA) are one of the most attractive option for the treatment diabe…

The management of diabetes has changed dramatically during the past hundred years. Biguanides, insulins, sulfonylureas, glycosidase inhibitors, thiazolidinediones, glinides, DPP-IV inhibitors, and SGLT-2 inhibitors are all competing in this field.

Today, Glucagon-like peptide-1 receptor agonists (GLP-1 RA) are one of the most attractive option for the treatment diabetes because they effectively lower A1C and weight while having a low risk of hypoglycemia. To date, GLP-1RAs have accounted for 12% of the glucose-lowering drug market and are maintaining a high growth trend.

Since the first GLP-1RA, exenatide, was approved in 2005, more than 10 products (by active ingredient/combination) have been marketed worldwide. At present, there are three blockbuster products, liraglutide, dulaglutide and semaglutide (with annual sales of USD 5 billion). 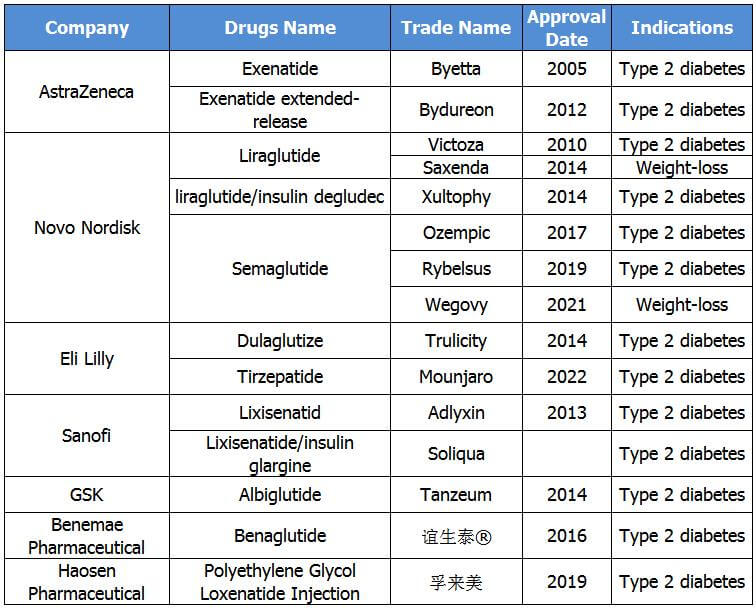 Liraglutide, approved by the FDA in 2010 under the brand name Victoza®, has surpassed exenatide in sales in the first two years of marketing due to its excellent efficacy and lower adverse effects. Liraglutide has occupied the top spot in the market of GLP-1 RAs for nearly a decade, with sales peaking at $5 billion in the 10th year after launch (2019).

Dulaglutide was launched by Eli Lilly in 2014 and proved non-inferior to liraglutide in a type 2 diabetes head-to-head trial. Thanks to the reduced frequency of dosing (once a week), dulaglutide sales climbed rapidly, topping $5 billion in the sixth year after launch (2020). But the good times did not last long, as semaglutide sales surpassed dulaglutide in the first half of 2022.

Smeaglutide was launched in 2017 and beat dulaglutide in a phase 3 head-to-head superiority trial, demonstrating excellent clinical glucose-lowering effects. After the approval of the injectable Ozempi, the oral tablet Rybelsus and the weight reduction drug Wegovy have been launched successively. Semaglutide has exceeded USD 5 billion in only 3 years of market launch and will sprint for USD 10 billion in 2022, and the future market ceiling will be higher than the first two drugs. 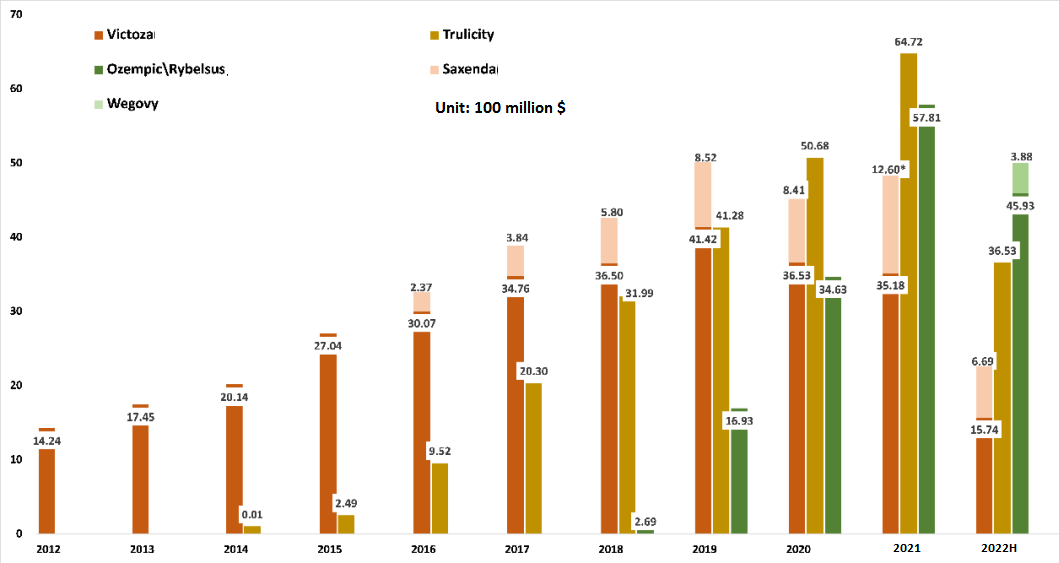 GLP-1RA has continued to iterate on the demand for improved adherence, with essentially every new generation of GLP-1 drugs achieving a comprehensive overtake of the previous generation. The first marketed GLP-1RA drug, exenatide, began to decline in sales in the second year of liraglutide's launch, with peak sales ending at $797 million in 2009. The same was true for the first long-acting weekly formulation, exenatide microspheres, with sales peaking at $580 million three years after launch. The market performance was even more average for lixisenatide launched by Sanofi (2013) and albiglutide launched by GSK (2014, withdrawn from the market in 2018). The above products are not as effective in lowering glucose as earlier products or have greater side effects, so even though they had a lead at the time of commercialization, they were eventually replaced by later-marketed drugs with better efficacy.

In the face of fierce competition from single-target drugs, Novo Nordisk and Eli Lilly introduced GLP-1/GIP receptor dual agonists to the clinic in 2014 and 2016, respectively. And in May 2022, Eli Lilly received FDA approval for its dual GLP-1R/GIPR agonist Tirzepatide (Mounjaro), becoming another blockbuster drug in the glucose-lowering field. 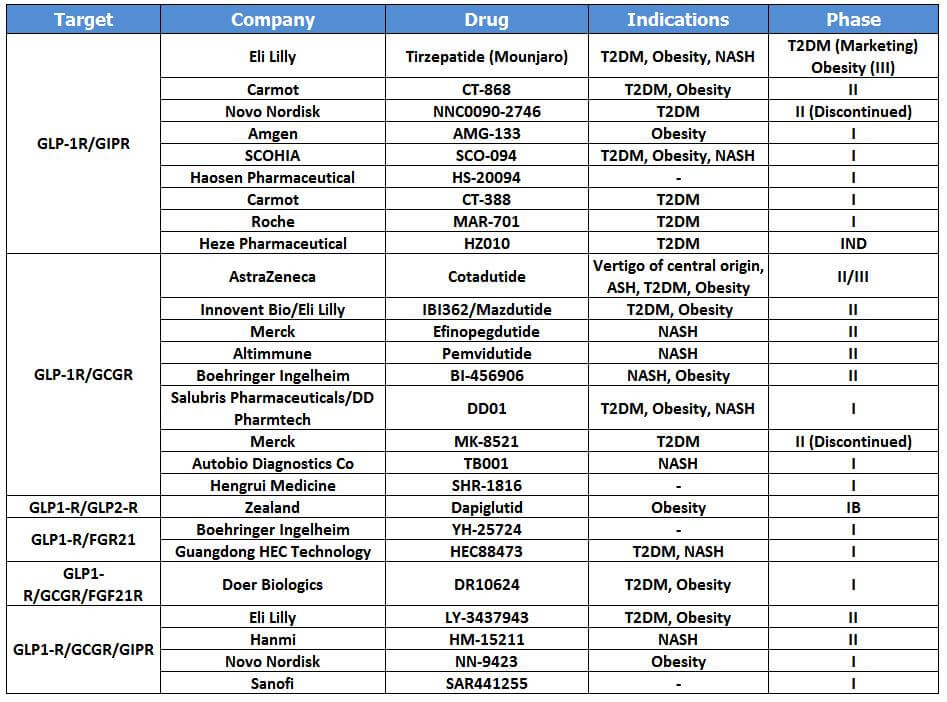 Tirzepatide has achieved rapid sales growth since its launch. According to Eli Lilly's third-quarter financial report, Mounjaro generated $187 million in revenue in the third quarter and $200 million in cumulative revenue since its launch. Mounjaro is expected to be Eli Lilly's new ace in the hole against Novo Nordisk's semaglutide. Mounjaro sales are expected to reach $4.7 billion in 2026, according to an analysis of data from research firm Refinitiv. 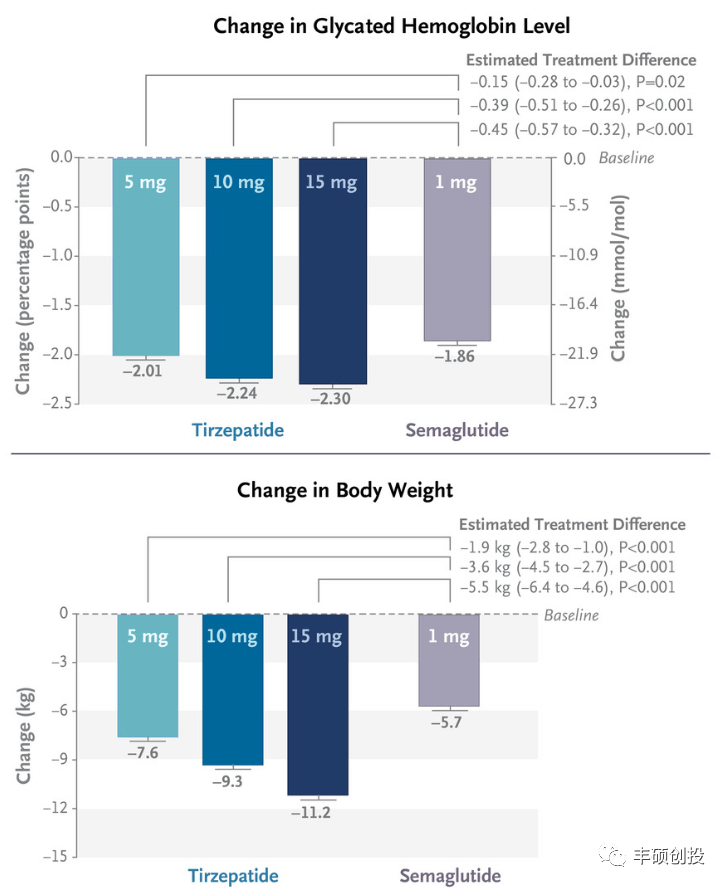 Figure 4. Comparison of glucose-lowering and weight-loss effects of Tirzepatide and semaglutide in the SURPASS-2 head-to-head trial (Source: Reference 4)

As the competition for type 2 diabetes drugs is too fierce, nonalcoholic steatohepatitis (NASH) has become a priority choice for late-stage clinical dual GLP-1/GCG receptor agonists, such as the development programs of AstraZeneca, Merck Sharp & Dohme (Efinopegdutide), and Boehringer Ingelheim.

In the Phase IIb clinical results published in 2021, AstraZeneca's Cotadutide was compared with liraglutide and had similar glucose-lowering and weight-loss effects in the clinical setting (except for the 500ug weight-loss effect). Such data is disappointing when dual agonists are compared to older drugs marketed 10 years ago, not to mention benchmarking against a host of newer drugs, such as simeglutide.

Figure 5. Comparison of glucose-lowering and weight-loss effects of Cotadutide and liraglutide (Source: Reference 5)

Thankfully, patients showed significant improvement in liver parameters AST and ALT levels and liver fibrosis after Cotadutide treatment and contrasted differently with liraglutide. As a result, AstraZeneca also initiated a phase III clinical study of Cotadutide for NASH in May 2022. It should be noted that in this study there was a significant increase in TRAEs (46%-61% vs. 22.7%) and discontinuation rates (13%-21% vs. 1.8%) after Cotadutide treatment compared to liraglutide. 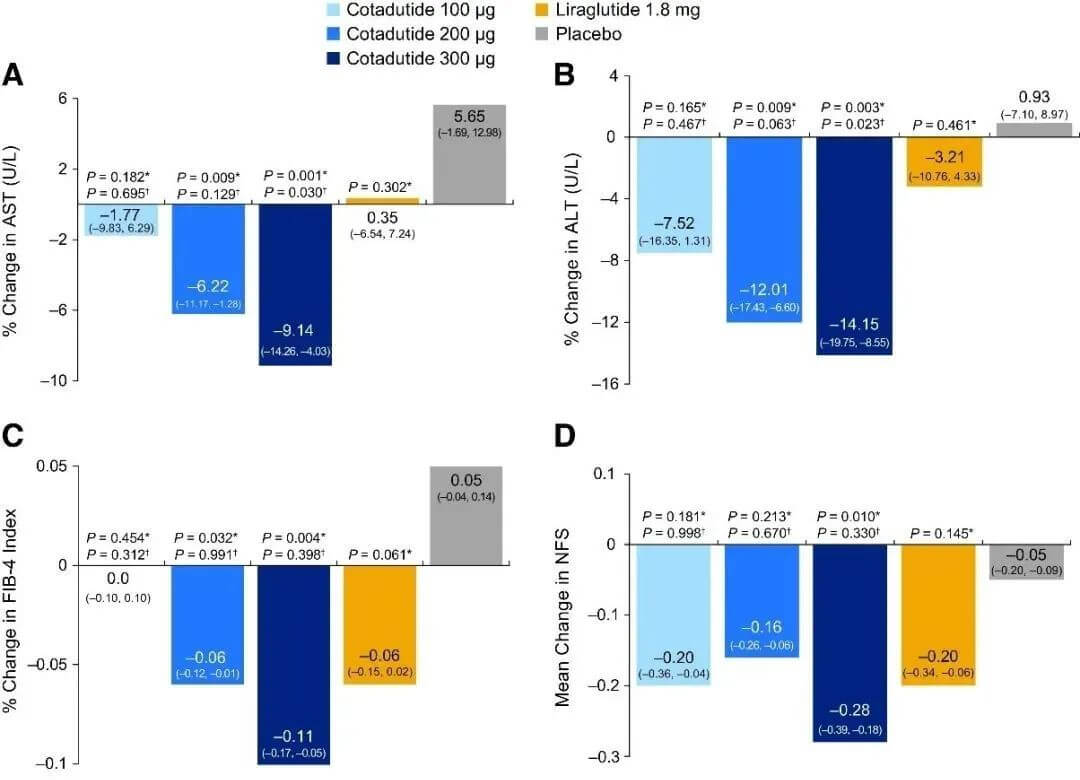 The long-acting and oral administration of GLP-1 drugs are the two major achievements in the field of glucose lowering, and Professor Daniel Drucker, one of the founders and outstanding leaders in the field of GLP-1 research, has optimistically predicted that in the near future, GLP-1 drugs will replace insulin as the main line of diabetes treatment. In the weight loss market, GLP-1 drugs, which can be used to lose weight with a single injection, have even more room for imagination.