Semaglutide: A Star Product In The Field of Hypoglycemic And Weight Loss

In this article, we will introduce this new star semaglutide in the hypoglycemic and weight loss field.

Glucagon-like peptide 1 receptor agonists (GLP-1 RAs) are synthetically modified peptides that resemble endogenous GLP-1. These drugs mainly target the damaged incretin system in patients with type 2 diabetes (T2DM). In 2005, the first GLP-1 RA exenatide was approved by the FDA for the treatment of T2DM. Semaglutide is a new long-acting GLP-1 RA developed by Novo Nordisk. It was first approved by the FDA in December 2017. It is used to assist diet control and exercise to improve blood sugar control in patients with type 2 diabetes. In June 2021, the FDA approved the drug for chronic weight management in obese or overweight adults. In China, semaglutide was launched in April 2021, and the currently approved indication is only type 2 diabetes. In order to further improve the medication convenience and compliance of patients, Novo Nordisk has developed the first oral semaglutide tablet, which is the first oral GLP-1 RA approved by the FDA, bringing benefits to diabetes patients around the world. In this article, we will introduce this new star semaglutide in the hypoglycemic and weight loss field. 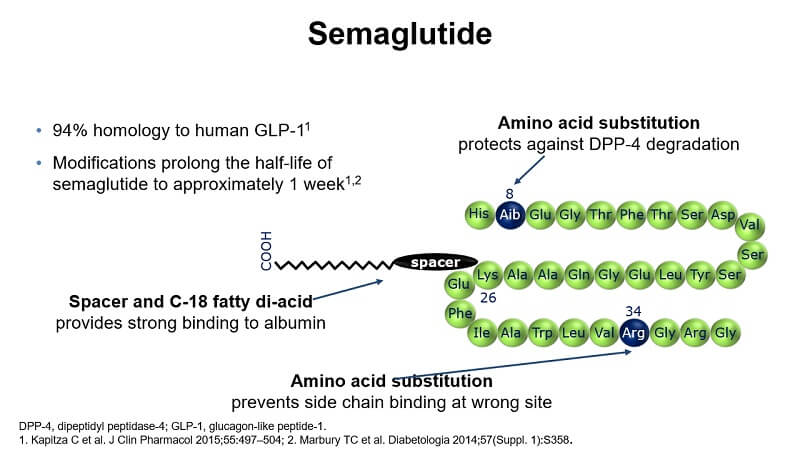 Glucagon-like peptide-1 (GLP-1), an incretin hormone that has important effects on blood sugar control and weight regulation, was first discovered in the 20th century by W. M. Bayliss and E. H. Starling et al. Natural GLP-1 has been shown to restore the insulin secretory response and is an effective therapeutic target for type 2 diabetes. However, its clinical use is limited due to its short half-life. Therefore, people began to try various methods to increase the half-life of GLP-1.

Human serum albumin (HSA) is one of the most stable and abundant plasma proteins. It consists of three homologous domains assembled into heart-shaped proteins. The high affinity binding of HSA to FcRn brings the protein back into the plasma, thereby protecting it from degradation during endocytosis, giving it a half-life of several weeks. Another important feature of HSA is its ability to bind to a variety of components in plasma to improve the solubility and transport of other insoluble substrates, such as fatty acids and steroids. The concept of using albumin as a carrier to improve drug efficacy has been widely used in drug design. 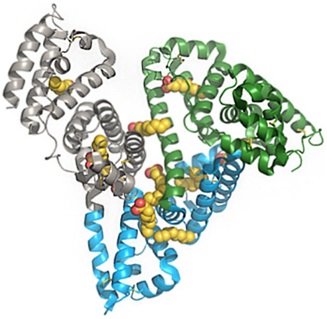 Novo Nordisk adopted the concept of reversible drug-albumin binding in the design of semaglutide. The main challenge identified in the early studies was that the binding of the GLP-1 analogue to albumin would affect its binding to the receptor GLP-1R. In addition, there is the practical question of whether it is possible to stabilize GLP-1 analogues against systemic clearance to achieve plasma levels sufficient to control blood glucose after OW administration (once a week). To solve these problems, the design of semaglutide had the peptide skeleton modified only at position 8, where Ala was replaced by Aib, resistant to DPP-IV cleavage and with a high GLP-1R affinity. Systematic tests on C12-C20 fatty acid derivatives showed that the potency of GLP-1R increased significantly as the carbon atoms in the diacid increased from C12 to C18, but the affinity of the fatty acid derivatives with albumin was stronger when longer (>C18) diacids were used. Therefore, C18 dicarboxylic acid, which is used in semaglutide, is the best choice. In vivo kinetics studies showed that the half-life of the fatty acid derivative increased with the increase of its length in rats and miniature pigs. The half-life of C12 dicarboxylate was 1.2 hours, while that of semaglutide could reach about 7 hours.

Peptide molecules are large and hydrophilic, especially those with molecular weight higher than 1000Da, and do not diffuse to the phospholipid bilayer of the intestinal membrane through passive diffusion or carrier mediated transcellular transport. These factors increase the length of time peptides reside in the GI tract, making them susceptible to pH and enzyme degradation in the GI tract. To overcome this problem, the researchers combined semaglutide with SNAC to prevent enzyme degradation and promote drug absorption. The inclusion of hydrophobic SNAC molecules in semaglutide increases its lipophilicity. Once SNAC is incorporated into the gastric epithelium, it increases lipid membrane fluidity and facilitates the transport of semaglutide into the systemic circulation. When the two molecules reach the bloodstream, they dissociate easily, allowing the oral administration of semaglutide to act in the body in the same way as the subcutaneous administration of semaglutide. 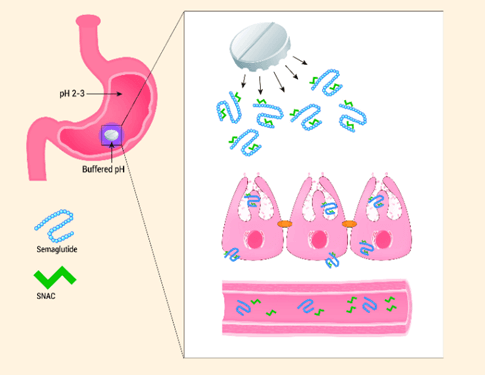 The Hypoglycemic Effect of Semaglutide

A "head-to-head trial" showed that oral semaglutide was more effective than sitagliptin 100 mg and empagliflozin 25 mg in reducing HbA1c and weight loss in patients with TDM. ADA criteria state that DPP-IV and SGLT-2 inhibitors are expected to reduce HbA1c by 0.5%-0.9%, while GLP-1 RAs can reduce HbA1c by 1%-1.5%. In terms of weight loss, SGLT-2 inhibitors also showed a tendency to promote weight loss in T2DM patients, but subcutaneous injections of smeiglutide had a greater effect.

A study conducted by Blundell et al. showed that in obese patients without type 2 diabetes, once a week of semaglutide was given for 12 weeks and the patients lost weight significantly. Semaglutide reduces energy intake, reduces hunger, and increases feelings of fullness and satiety. This effect has been shown to occur through GLP-1 receptor activation in the central nervous system, further indirectly regulating neuronal activity involved in appetite regulation and food intake and preference.

A double-blind trial published on NEJM in 2021 showed that 2.4mg semaglutide once a week plus lifestyle intervention can sustainably reduce the weight of obese patients and significantly improve the risk of cardiometabolic subjects factor. A meta-analysis published in THE LANCET in 2022 showed that among GLP-1 agonists, semaglutide may be the most effective drug for weight loss. 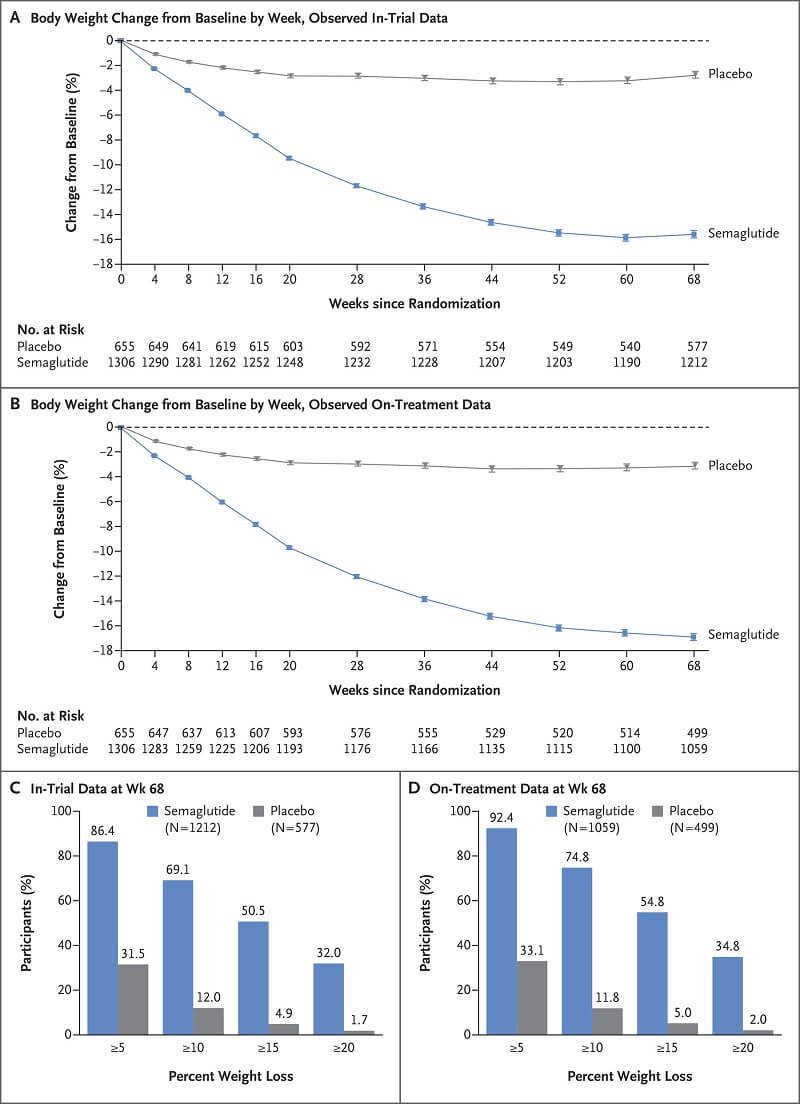 Semaglutide was well tolerated, and the most common side effects were gastrointestinal disorders (such as nausea, vomiting, diarrhea, constipation, and dyspepsia). Most of these adverse reactions were dose-dependent, transient (mainly in the first 2 weeks after the start of treatment), and mild to moderate in severity. The incidence of mild hypoglycemia induced by semaglutide is low, and severe hypoglycemia is even rarer. Headache, nasopharyngitis, influenza virus infection, and increased pancreatic lipase levels have been reported in semaglutide-treated patients, but less frequently than gastrointestinal reactions. In addition, elevated amylase levels may occur during semaglutide treatment.

Despite its excellent anti-obesity performance, the use of semaglutide for medical-beauty slimming in normal-weight populations may have unpredictable adverse effects. GLP1 agonists have been shown to be associated with an increased risk of gallbladder/biliary tract disease, especially at high doses, for longer periods of time, and for weight loss. In addition, semaglutide induces differentiation of thyroid C cells into medullary thyroid cancer cells.

Oral semaglutide (Rybelsus®), the first oral GLP-1 RA approved by the FDA, represents a paradigm shift in the treatment of T2DM. Oral semaglutide may be an attractive option for patients with T2DM who need to control blood sugar, want to lose weight, and are not interested in injectable (or intensified) therapy.