Here, we will discuss what are the advantages of Trodelvy, and which is superior in the field of breast cancer treatment,…

Trodelvy (sacituzumab govitecan-hziy) is a First-in-class Trop-2-directed antibody-drug conjugate (ADC) indicated for the treatment of metastatic triple-negative breast cancer (mTNBC) and metastatic urothelial cancer (mUC). Here, we will discuss what are the advantages of Trodelvy, and which is superior in the field of breast cancer treatment, Trodelvy vs. Dato-DXd, Enhertu?

Trodelvy is a targeted (biological) therapy, which  is composed of 3 components:

Trodelvy® was developed by Immunomedics, and Gilead acquired ownership of Trodelvy® in September 2020 through its $21 billion acquisition of Immunomedics. Trodelvy's first clinical trial began in 2012 and has a substantial clinical evidence base. Even without the aura of Gilead's huge acquisition, Trodelvy had previously been terminated early with stunning clinical data and received accelerated approval for triple-negative breast cancer (TNBC) nearly 2 months ahead of the scheduled approval date, making it a potential star drug.

Trodelvy has been approved in more than 35 countries and is undergoing multiple additional regulatory reviews worldwide for the treatment of adult patients with unresectable locally advanced or metastatic triple-negative breast cancer who have received two or more prior systemic therapies. Gilead Sciences has submitted a supplemental Biologics License Application to the U.S. FDA.

In addition to breast cancer, Trodelvy® has shown positive performance in several cancer types including uroepithelial cancer, lung cancer, and prostate cancer. Phase II clinical studies for single-agent second-line treatment of uroepithelial carcinoma showed an ORR of 28%, and this indication has been approved for marketing by the FDA. 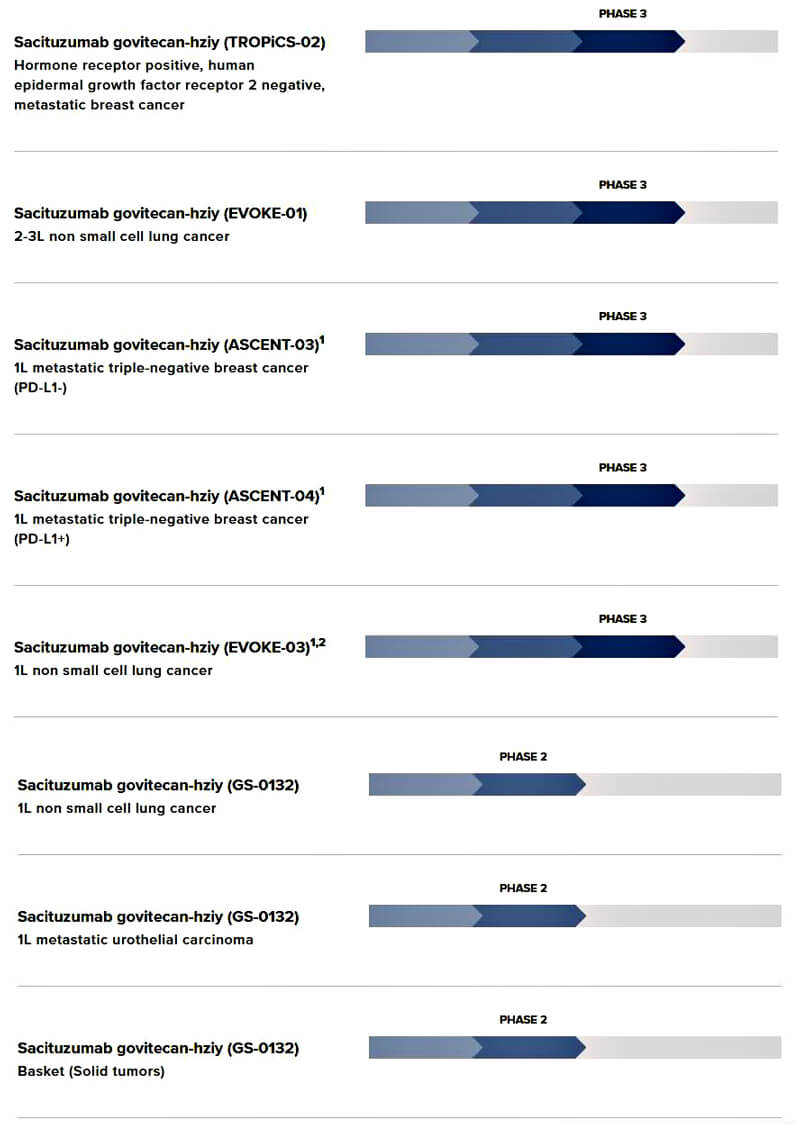 Trodelvy's sales were $380 million in 2021. According to analysts, Trodelvy's sales need to peak at $4 billion in order for Gilead to recover the cost of the acquisition. But the potential competition is also fierce and challenging for Trodelvy's subsequent growth. Currently, the two products with the most competition are Dato-DXd and Enhertu.

In terms of same-target ADC products, there are more than 20 TROP-2 ADCs in development worldwide. Its main competitor, Datopotamab deruxtecan (DS-1062/Dato-DXd) from Daiichi Sankyo/AstraZeneca, is already in Phase III clinical development. 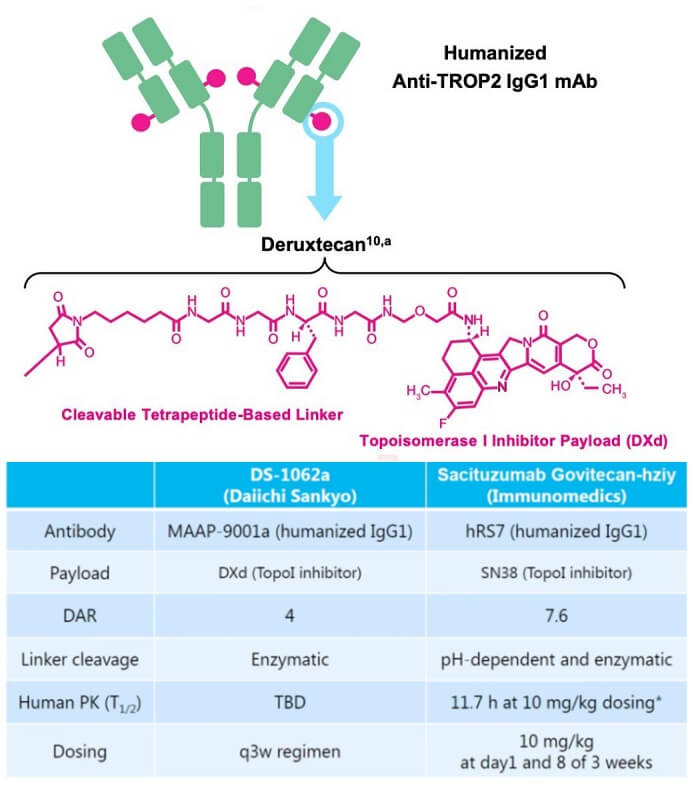 Dato-DXd is designed and developed based on Daiichi Sankyo's proprietary DXd-ADC technology platform, which uses DNA topoisomerase I to inhibit DXd with high activity and is able to kill nearby cancer cells through the "bystander effect" with short half-life and low toxic side effects. The linker is highly stable and can be specifically cleaved by enzymes in the tumor tissue, avoiding the killing effect on normal tissue.

On December 7, 2021, Daiichi Sankyo disclosed at SABCS the latest data from the TROPION-PanTumor01 TNBC cohort, a clinical phase I trial of Dato-DXd, showing that Dato-DXd demonstrated sustained remission and disease control in patients with metastatic triple-negative breast cancer who experienced disease progression after standard therapy.

One of Trodelvy's indications, HR+/HER2- breast cancer, has been challenged by a strong rival, Enhertu, although the patient populations are not the same, but there is some degree of overlap. Trodelvy's Phase III TROPiCS-02 study included patients with HR+/HER2- metastatic breast cancer who had received endocrine therapy, CDK4/6 inhibitors and 2-4 lines of chemotherapy, including patients with HER2-low and IHC 0 status.

At the 2022 ASCO meeting, data from Enhertu's DESTINY-Breast04 and Trodelvy's TROPiCS-02 were both released. DESTINY-Breast04, which defines a new breast cancer staging that distinguishes low HER2 expression (IHC 1+ or IHC2+/ISH negative) from the HER2-negative population, was approved by the FDA for priority review in approximately two weeks. TROPiCS-02, despite meeting clinical endpoints and being included in the NCCN guidelines as a Class 2A recommendation based on positive data, did not yield the expected results. Detailed data can be found in the chart below. 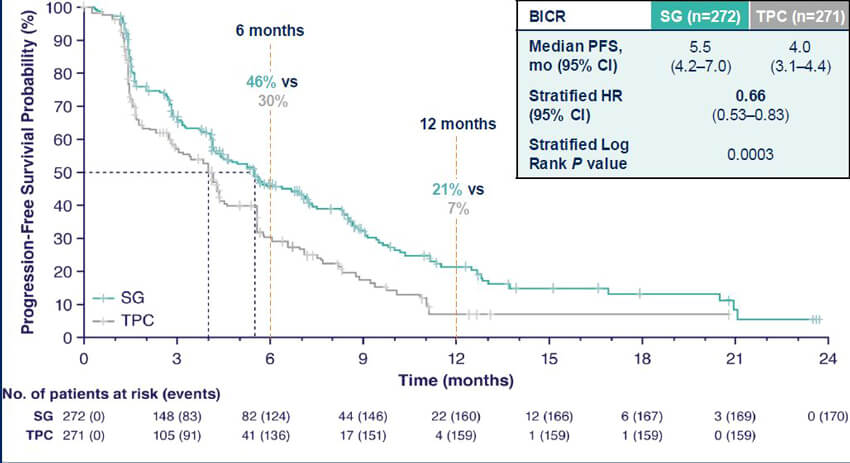 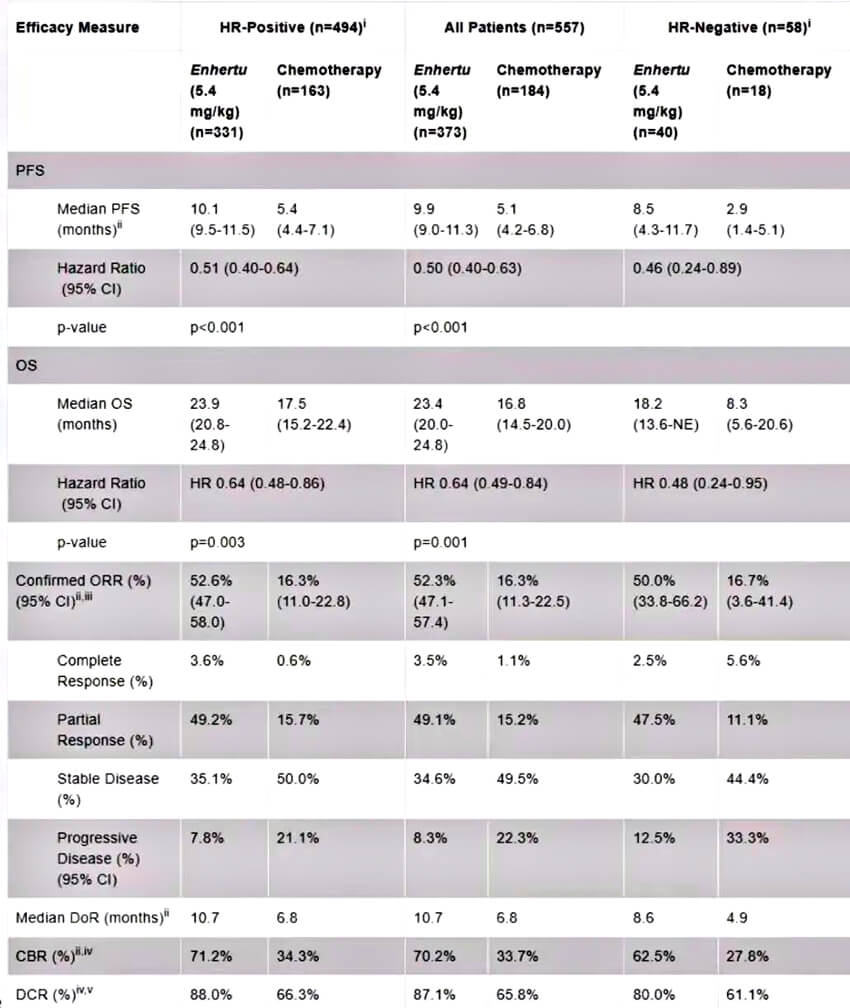 Huateng Pharma is dedicated to being your most reliable partner to provide chemical synthesis and high-quality PEG linkers for ADC drugs. We are committed to promoting the progress of your ADC discovery and development projects.

A Look into Antibody–drug conjugates (ADCs) Targets
Overview of Triple Negative Breast Cancer And FDA Approved Therapies
ADC Linker - Development and Challenges
What Are PEG Linkers and Their Applications?