PDC (Peptide Drug Conjugate), as a new type of conjugated drug, has also begun to attract attention in the research and d…

ADC drugs are favored by innovative pharmaceutical companies because of their combined therapeutic effects. PDC (Peptide-Drug Conjugate), as a new type of conjugated drug, has also begun to attract attention in the research and development field due to its unique advantages.

There are currently 14 ADC drugs approved in the world, which have undergone three generations of technological changes. However, only two PDC products were approved, namely Lutathera and Pluvicto (both polypeptide-nuclide conjugates), which were approved by Novartis in 2018 and 2022.

The concept of PDC

PDC is a new type of conjugated drug. It is composed of three parts: peptides, cytotoxic payloads and linkers. The targeted peptides is used as a targeted drug delivery carrier to covalently couple with toxic drug molecules to enhance the targeting of drugs. The choice of linker has an important influence on whether PDC drugs can stably reach the target site. The goal of PDC is to improve the efficacy of chemotherapy drugs and overcome the challenges of short circulating half-life and off-target side effects of chemotherapy drugs.

Therefore, from PDC's global perspective, there are opportunities for domestic enterprises, and they are synchronous.

Regarding the use of PDC, it covers four aspects of tumor:

1. In tumor metabolism and immunotherapy, the metabolism of tumors can be affected by coupling cytotoxic substances, and immune agonists can also be coupled.

2. In terms of gene therapy, some enterprises are exploring the therapeutic method of coupling small nucleic acid.

4. From the perspective of everything coupling, PDC research (including preliminary clinical experiments) has been conducted abroad, and PDC can be applied to many aspects of clinical practice.

Regarding the application of PDC, the hottest ones are the following two:

1. Polypeptide-cytotoxin conjugate: It will improve the clinical effect of first-line chemotherapeutic drugs while improving side effects.

The functional targeting role as a polypeptide is also fully demonstrated at this point. In the future, chemotherapy needs to further expand its use, increase its safety, and will have a good application. From the perspective of the market, chemotherapy drugs are always the first-line drugs for most tumors and the most widely used drugs in the tumor treatment guidelines of any country in the world.

Like ADC, PDC binds to target antigens on the surface of tumor cells, and then enters endosomes through endocytosis and then lysosomes. Under the action of lysosomal cathepsin B, the toxin is degraded and can play its anti-tumor effect in cells.

However, compared with ADC, PDC has a small relative molecular weight, and a part of it can penetrate into tumor cells in tumor tissues. 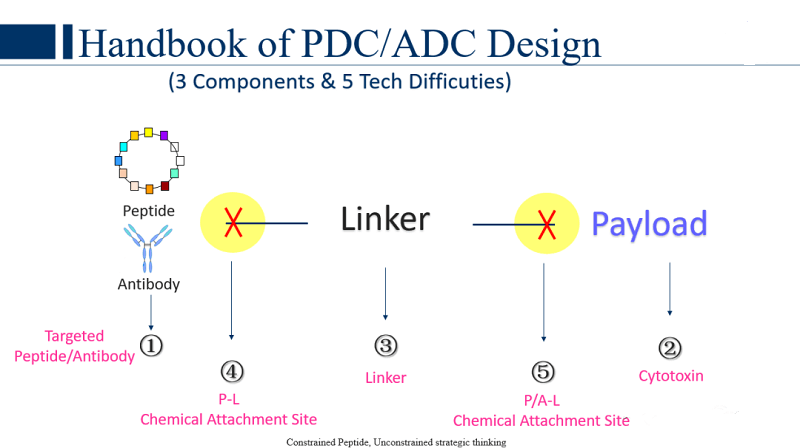 The second is stability. Targeting peptide as a peptide substance, to solve its stability problem in plasma. There are many enzymes in plasma that degrade amino acid chains. Appropriate chemical modification of targeting peptides is therefore required to enable drug delivery to target tissues.

The third is the half-life. Almost natural peptides enter the blood, and their half-life is less than half an hour, making it impossible to complete drug delivery. Therefore, prolonging the half-life of the targeted peptide can also make PDC play a real role in the human body.

How to solve the above three core problems through technology?

First of all, the main technology used for targeting peptides is to cyclize linear peptides or chemically modify the main and side chains to improve their stability and affinity with the target protein.

Traditional treatment can effectively prevent or slow down the growth of malignant tumors, but it does not have the ability to target the recognition of tumor cells. It is usually accompanied by systemic toxicity and large adverse reactions. So how do you improve efficacy while reducing side effects? Conjugated drug technology can effectively solve the above problems.

Although there are not many PDC drugs approved at present, with the development of technology, PDCs will become a research and development hotspot of pharmaceutical enterprises like ADCs in the future.

The cytotoxic drugs used in current PDC drugs, such as doxorubicin, paclitaxel, gemcitabine, and camptothecin, are highly effective drugs that exhibit cytotoxicity through different mechanisms.

As a novel anti-cancer therapy, PDC has the potential to overcome some of the limitations of ADC. Huateng Pharma is a worldwide leading PEG supplier that offers a wide array of different ADC Linkers to empower our customer's advanced research. We are committed to promoting the progress of your PDC discovery and development projects.