Hydrogels made of PEG materials are also widely used in the field of medical devices.

Polyethylene glycol (PEG) is nontoxic, non-immunogenic, non-antigenic, highly soluble in water and FDA approved. Besides being widely used for long-lasting and potentiation of drugs, hydrogels made of PEG materials are also widely used in the field of medical devices, including adhesion, hemostasis, anti-leakage and anti-adhesion of wounds in various surgical procedures, and as raw materials for implantable medical devices, replacing existing materials of plant, animal or human origin.

Hydrogels are hydrophilic, three dimensional cross-linked polymer systems  that can swell in water and hold a large amount of water while maintaining the structure. As a novel material, hydrogels have attracted much attention in recent years for applications in biosensing, drug delivery, tissue engineering, soft robotics, etc.

With the potential to integrate biophysical and biochemical cues to prevent non-specific protein adsorption, PEG hydrogels are one of the excellent biomaterials that can be used in the human body. With good physicochemical properties, low toxicity and high biocompatibility, PEG hydrogels can be gradually degraded in the human body and completely excreted out of the body, which can be widely used in various biomedical applications.  PEG hydrogels are used extensively in the controlled release of therapeutics, in medical devices, and regenerative medicine, and in various other applications, including wound sealing and healing, 3D printing of biosimilar materials, or as cartilage replacement. 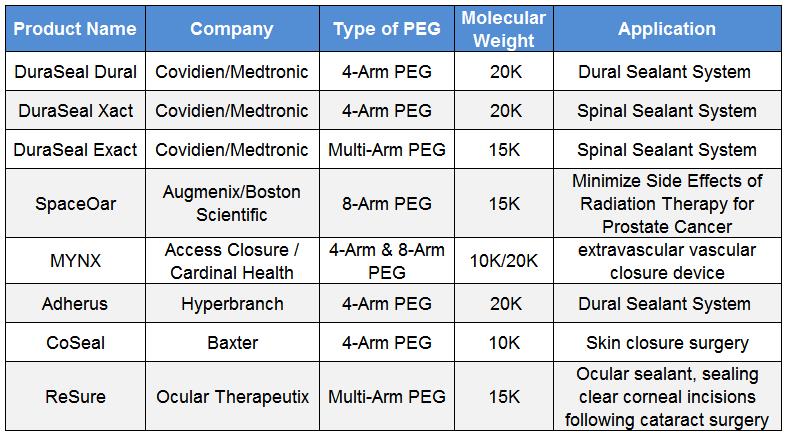 Tissue adhesives for hemostasis and wound healing is one of the main applications of PEG hydrogel products. The hydrogel, which is mainly composed of PEG derivatives, can be sprayed onto the wound surface and cured rapidly to prevent wound bleeding and infection, and degrade by itself after the wound heals. At the same time, PEG-based hydrogel can effectively prevent the adhesion of internal organs during surgery when sprayed onto the surface of organs. Due to the good biocompatibility of PEG derivatives, this process does not cause abnormal reactions in the human body. The PEG derivatives are not absorbed by the body and can be metabolized out of the body.

COSEAL is composed of two biocompatible PEG derivatives that combine with dilute hydrogen chloride solution to rapidly form a covalently bonded hydrogel and adhere to both tissue and synthetic graft materials, which can provide a rapid seal at vascular suture lines, as well as reduce air leaks occurring after lung resection.

DuraSeal® is a self-polymerizing agent which rapidly forms a firm, watertight hydrogel layer within several seconds of application over the dural surface. DuraSeal consists of a 4-arm PEG solution and a trilysine amine solution. After spraying on the trauma surface, the two components can be rapidly cross-linked into PEG hydrogel on the surface of human tissue to achieve the effect of sealing the dura mater after suturing and preventing the leakage of cerebrospinal fluid, after which it is decomposed by the human body within 4~8 weeks. 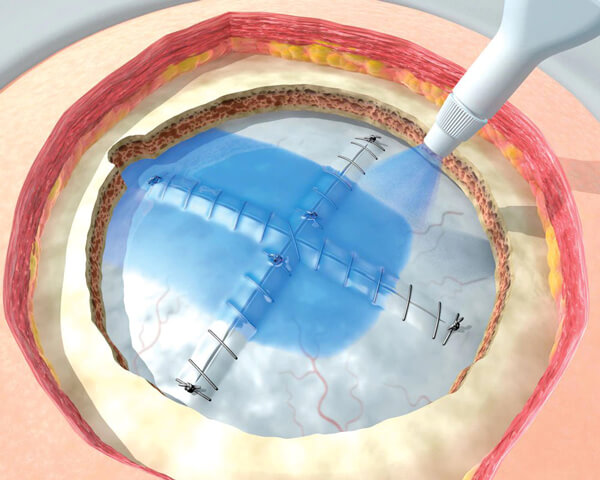 As the first dural sealant approved for craniofacial surgery in the United States, DuraSeal not only has excellent tissue adhesion properties, but also has a post-operative cerebrospinal fluid leak rate that is only 1/4 of that of traditional fibrin glue. Pre-market studies showed no leaks during the evaluation period, 98.2% of patients met the primary treatment endpoint, and the incidence of post-operative cerebrospinal fluid leakage was only 4.5%, demonstrating the effectiveness of the product.

Cardinal Health's MYNX CONTROL™ Vascular Closure Device, designed with safety and patient comfort in mind, uses PEG polymer as the sealing material against the vessel wall to gently close the wound without clamping, suturing or the use of a metal implant, and the sealing material completely degrades after the artery heals within 30 days.

When treating cancer patients with radiation therapy, PEG hydrogel can be injected to create space between tissues, thus protecting the healthy tissue from the high dose radiation needed to treat the cancer cells.

SpaceOAR Hydrogel is a semi-solid, natural substance that radiation oncologists use to decrease toxicity to the nearby rectum from radiation beams targeting the prostate. By acting as a spacer, the SpaceOAR hydrogel temporarily moves the rectum a half inch (1.3 cm) away from the prostate, thus helping to reduce the radiation dose delivered to the rectum and may eliminate or decrease damage. Clinical studies have shown that SpaceOAR reduces rectal mucosal injury from 90% to 13.6% in patients receiving high-dose radiation therapy. At a three-year follow-up, patients who received SpaceOAR prior to radiotherapy experienced 73.5% less late radiation toxicity or rectal injury.

Hyaluronic acid (HA) based hydrogels for esthetic applications found widespread use. HA hydrogel crosslinked with PEG has been recently introduced.

The existing commercially available HA hydrogels are all applied with the crosslinker BDDE (1,4-butanediol diglycidyl ether), which requires the free BDDE content to be controlled at 2 ppm in the production process due to its potential carcinogenic toxicity. In contrast, the use of PEG derivatives as crosslinkers instead of BDDE can reduce the potential toxicity risk of the product, due to the nontoxicity of PEG derivatives. Meanwhile, PEG derivatives cross-linked with HA can form a macromolecule with a more three-dimensional spatial structure, which can maintain excellent support for a long time and show stronger adhesion, effectively preventing displacement after implantation.

In addition, PEG hydrogels can be used to prepare absorbable implantable drug delivery systems and have also been used to develop self-healing ligand hydrogel injections for the treatment of eye diseases, antibacterial and angiogenesis, skin wound healing due to diabetes and 3D cell culture.