The ADC linker molecule has a major influence on the fate of ADCs. The linker connects the antibody and the cytotoxic pay…

Innovative drug development has never been easy, and this is especially true for ADC drug development. It has taken nearly 90 years from 1913, when the ADC theory first emerged, to the approval of the first ADC drug. However, the approval of the first ADC drug did not successfully open the era belonging to ADC, but also withdrew from the market in 2010 because of too many adverse effects. It was not until 2019, when the FDA approved three ADC drugs, that ADC drugs ushered in the dawn of hope.

The fact that the time span from the emergence of the theory to the landing of the drug is so long speaks volumes about the difficulty of ADC drug R&D. After all, there are so many elements that go into the preparation of an ADC drug. From antibody screening to toxin selection to the selection of linkers and linkage methods, these elements are closely linked to far-reaching.

The ADC linker molecule has a major influence on the fate of ADCs. The linker connects the antibody and the cytotoxic payload. The linker imparts ADCs with (1) high stability in the circulation, and (2) specific release of payload in the target tissue. These seemingly contradictory requirements of stability and release lead to the major challenge in the development of linkers. 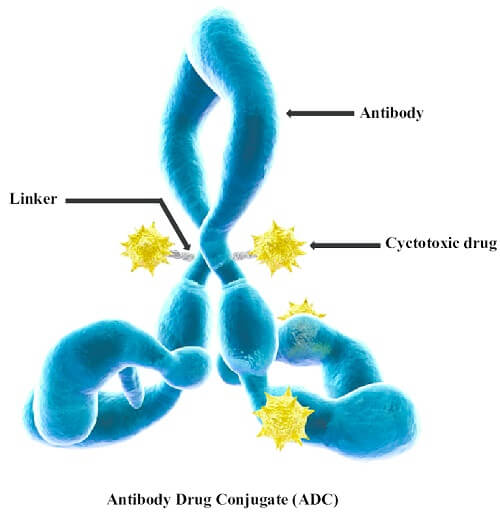 The selection of a suitable linker is crucial for the preparation of a successful ADC. Ideally, a linker needs to have all three of the following characteristics:

1) The linker is stable in the circulatory system.

The ADC drug has a long half-life, so it needs the linker to be stable in nature so that it can prevent the linker from being broken down in the blood and releasing the toxin prematurely.

If the linker is not stable enough in the blood, it will cause the ADC to be broken down before it enters the tumor cells, and the drug will have a reduced effect on the tumor cell and even kill other healthy cells by mistake.

2) The linker can release the cytotoxic payload specifically in the tumor.

Mylotarg, the first ADC drug on the market, was withdrawn in 2010 because the linker could not be released selectively and had off-target problems, producing strong hepatotoxicity coupled with mediocre efficacy. Although Mylotarg was back on the market in 2017, the FDA put a black box on it warning of its toxicity.

3) The linker should be hydrophilic.

The higher the hydrophobicity of ADCs, the higher the rate of being cleared. This is because toxins are mostly hydrophobic, and the binding of hydrophobic linkers to hydrophobic toxins will promote the aggregation of ADCs. The aggregated ADCs are easily detected by the immune system and are quickly removed as foreign bodies, which leads to a decrease in the number of ADCs entering the tumor cells for action and a decrease in drug efficacy.

There have been many studies on strategies to increase hydrophilicity with PEG. The increased hydrophilicity provided by a PEG linker can influence the potency, toxicity and pharmacokinetics of the ADC. Huateng Pharma can provide you with high quality PEG linkers for your ADC linker R&D.

The first generation ADCs, represented by Mylotarg, are mostly selected from acid-labile cleavable linkers, whose mechanism of action is selective cleavage according to the difference of PH values in blood and tumor cells, exemplified by the hydrazone bond.

However, the actual situation is different from what is imagined. In the body circulation (pH 7.4), the hydrazone bond is slowly hydrolyzed despite the alkaline environment, leading to a slow release of the toxin in the bloodstream and off-target toxicity.

ADC drugs using non-cleavable linkers are endocytosed by tumor cells and enter the lysosome for degradation. Antibodies are degraded by proteases to amino acids, but linkers are not degraded, eventually forming amino acid-linker-small molecule toxin complexes.

Thioether linkers are the most commonly used for non-cleavable linkers. The representative drug of the second generation ADC, T-DM1, uses a thioether linker (SMCC).

Although the second generation ADC has been enhanced compared to the first generation ADC, it still suffers from the shortcoming that the non-cleavable linker cannot exert the bystander killing effect.

Bystander killing occurs when the drug from an ADC is released either from the target cell following internalisation and degradation of the ADC or release of the drug within the extracellular space.

In contrast, non-cleavable linkers, the antibody portion, even if degraded by proteases, still have amino acid residues attached to the linkers and cytotoxic agents, and this charged degradation product cannot cross the cell membrane and naturally cannot exert a bystander killing effect. Therefore, although these ADC drugs are highly stable, the tumor killing power is relatively inferior.

Val-Cit (valine-citrulline) dipeptide is the most commonly used cleavable linker in ADC, which can be sheared by histone proteases in lysosomes. Tumor cell lysosomes contain much higher levels of histone proteases than lysosomes in blood, so this linker has better stability in blood.

The ADC drug Polivy uses the Val-Cit linker, however, its inherent high hydrophobicity causes ADC aggregation and precipitation, making it difficult to have a high DAR (drug to antibody ratio).

The number of cytotoxic drugs attached to each antibody is the drug antibody ratio. As can be seen in the figure below, as the DAR gets larger, the drug metabolism rate of the ADC drug increases, the half-life decreases, and systemic toxicity increases. 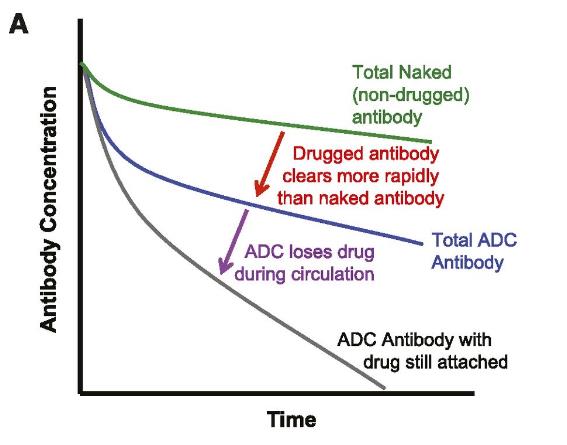 However, it is not always better to have a higher DAR. A high DAR makes it easier for ADC drugs to accumulate in the plasma and be cleared; while a low DAR may prevent ADC drugs from achieving the desired therapeutic effect. It is generally agreed that a DAR between 2-4 is the most optimal choice for ADC drugs. The main focus of the linker also revolves around how to improve its hydrophilicity and DAR.

The emergence of DS-8201 was a historic turnaround. Its linker was not only satisfied with stability without shedding, but also improved toward the pursuit of potency.

The DS-8201 from Daiichi Sankyo has received such high recognition partly because of its new small molecule toxin and bystander effect, but most critically because of the advances in linkers.

DS-8201 uses a GGFG tetrapeptide linker, which well addresses the problem of low DAR. This cleavable hydrophilic peptide linker both prevents the generation of aggregates and breaks the previous limit of DAR between 2-4.

Of course, besides the aforementioned linkers, there are many more linkers on the way of development, such as phosphatase and pyrophosphatase linkers, β-galactosidase linkers, sulfate esterase linkers, etc.

With the resolution of the linker problem, ADC development has entered a golden age. There are now 14 approved ADC drugs worldwide, nine of which have been approved for marketing in the last three years.

The progress of ADC is also not only attributed to the advancement of one aspect, but the accumulation of multiple technologies such as antibodies, toxins, linkers, and connection methods.

From the first generation ADC to the third generation ADC, it spanned more than 20 years and several technological upgrades before finally ushering in the high moment of ADCs. Despite this, the problem that has to be acknowledged is that the ADCs that have been marketed still have unresolved issues.

Adverse effects have also led to a narrower therapeutic window for ADC drugs. This means that a small difference in dose or blood concentration can lead to treatment failure or serious adverse reactions, which greatly limits the therapeutic potential of ADCs.

On the other hand, the limited number of linkers cannot meet the demand of rapidly expanding payloads.

With the advancement of technological tools, ADCs will not only act to treat cancer, but also microbial infections, immunomodulation, etc. Thus ADC payloads will also not be limited to toxins; novel payloads can be anti-inflammatory agents, antiviral agents, etc. As the payload is updated, the linker, which is a supporting facility, also needs to be updated simultaneously.